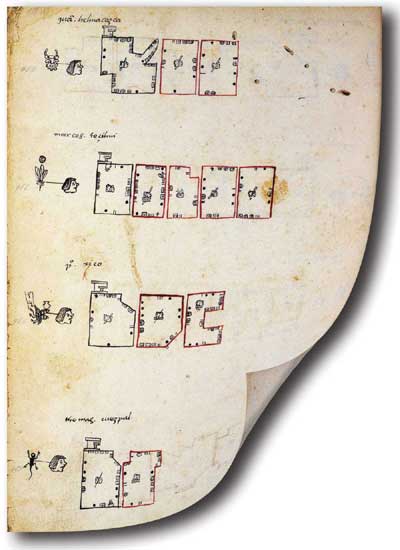 A new study in Science magazine reveals the meaning of the heart, bone, arm and arrow symbols used by the ancient Aztecs to survey and record the size of land holdings in pre-Columbian Mexico. Certain facts about Aztec mathematics were already known from records made by Spanish priests during the early years of the conquest, including the use of 20 (rather than 10) as the basis of the number system, and of the rod, or tlalquahuitl, as the basic unit of length, which measures 2.5m.

This information did not make sense, however, of some of the symbols found in two books dating from 1540 filled with small property maps. It was only when mathematician Maria del Carmen Jorge y Jorge, of the National Autonomous University of Mexico, and geographer Barbara Williams, of the University of Wisconsin, decided to treat the symbols as fractions rather than as whole numbers that the area calculations began to work.

After trying different values to see which would fit best, the team decided that the arrow symbol means ‘a half’, an arm is one third, a bone is one fifth, a heart two fifths and a hand three fifths. Even this doesn’t tell the whole story, say Dr Williams and Dr Jorge y Jorge, because the books contain no clues as to the formulae being used to calculate land area.

What is clear is that more than one formula was used, rather than simple multiplication of length by breadth: complex systems were deployed to measure irregularly shaped plots, such as terraces following the contours of a hillside, with an irregularly curving boundary. In some cases, the plot was subdivided into triangles, and in others a centre line was used and offset measurements taken, say the authors, who have so far cracked the values used for 287 of the 369 fields in the two ancient books. •