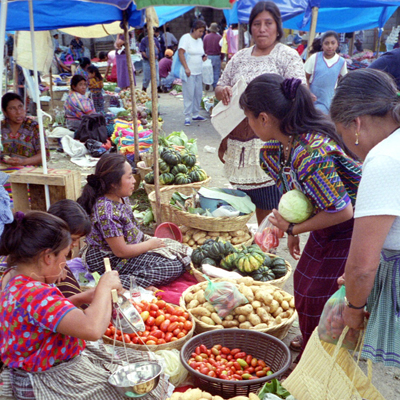 Archaeologists and soil scientists have come up with the novel theory that the open areas conventionally described as ‘ritual plazas’ in Mayan cities of the Classic era (AD 300 to 900) could really be outdoor markets. This idea challenges the notion that the Maya had a centralised food distribution system whereby foodstuffs were controlled by the ruling class, gathered in the form of tax and tribute and redistributed according to a complex set of social rules. Market places imply that a free-market economy might have supplemented or co-existed with the tax and tribute system.

The evidence is given in a report in the journal Latin American Antiquity by Bruce H Dahlin, an archaeologist at Shepherd University, West Virginia, and Richard E Terry, a soil biochemist at Brigham Young University, Utah. Dr Dahlin’s team surveyed the wide clearing at the centre of the 1,500-year-old Maya city at Chunchucmil on the Yucatán Peninsula of Mexico. They found rock alignments that were too small to be house foundations, and that seemed to outline the positions of stalls and regular pathways.

Dr Terry’s team took hundreds of soil samples from the clearing and adjacent areas and looked for phosphorus, the element that food and other organic matter gives off as they decay. Phosphorus adheres to soil particles and leaves a durable chemical trace, even in tropical rain forests that get up to 2m of rain a year. Most samples from the Chunchucmil site showed phosphorus concentrations 40 times higher than in surrounding soils, and at levels that are consistent with results from modern open-air markets in the region.

The Mayan city of Chunchucmil had an estimated population of 45,000 at the city’s peak around AD 500, and was connected by canal to the Gulf of Mexico, 15 miles away. The new research suggests that the city might have been an important trade centre for northwestern Yucatán.