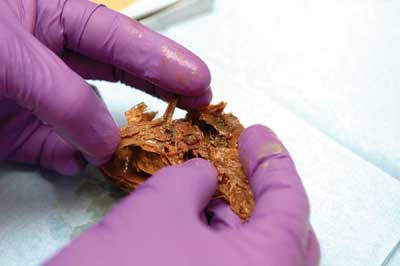 A team of scientists in California has restored the eyes of two mummies found in Chile’s Atacama Desert. One eye belongs to a two year old boy who died around 1000 years ago. The other eye came from the mummified remains of a 23 year old woman who died about 750 years ago. Doctor William Lloyd, an ophthalmologist at the University of California at Davis Medical School, who is leading the restoration, plans to use the mummies’ eyes to investigate contemporary eye diseases in ancient civilizations.

The Chilean mummy tissues, which resemble freeze-dried material, have been naturally preserved in the arid desert environment. Since they lack the chemical preservatives used in Egyptian mummies, they are particularly useful for scientific investigation.

The rest of the mummies’ bodies are under investigation by palaeopathologist Arthur Aufderheide who was keen to turn the delicate eyes over to specialist researchers. On receiving the eyes, Lloyd’s colleague, Doctor Huck Holz, was struck by their lightweight delicacy: ‘They looked like a cheese doodle (an American puffed corn snack)’, said Holz.

The dry and brittle texture of the eyes meant that the first step in the investigation was the rehydration of the dried-up cells. Having restored them to nearly the size and consistency of normal human eyes, the team then had to prepare them for examination. To do so, they embedded the eyes in paraffin wax, slicing them for viewing under a microscope, and applying stains to highlight the tissues. While the infant boy’s eye was badly decomposed, bar the intact lens, the woman’s was ‘remarkably well preserved’, Lloyd said.

Aufderheide’s previous research on the mummies’ bodies revealed rather sorry stories. The two-year old boy had an inherited liver disease. The woman had lice, bad teeth, and osteoporosis – possibly the result of eating a diet of plants rich in oxalates, compounds that interfere with calcium absorption, and thus result in bone thinning. They had both suffered and recovered from bouts of pneumonia, though as yet it is unclear from what they died.

Applying the same techniques used in autopsies today, Lloyd and his team hopes to use the eyes of the mummies to diagnose other diseases.

Ophthamological analysis can identify not simply cataracts and glaucoma, but also the signatures of systemic ailments such as diabetes, high blood pressure, and infectious diseases. The discovery of such diseases in people living in the Americas before the time of Columbus would show that such ailments are ancient, and that genetics, rather than the modern environment or much-maligned modern American diet, may be their primary cause.

Speaking to CWA, Lloyd concludes that ‘the ability to apply 2005 laboratory technology successfully to ancient mummified human tissues will permit us to understand better, and hopefully prevent, health problems that beset present and future generations’. Thus, the past quite literally offers a new vision on the future.