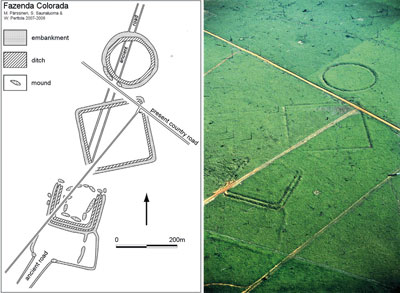 Stories about lost jungle civilizations are normally the staple of adventure films or the lunatic fringe. Now fiction has become reality with the discovery of hundreds of huge and hitherto unknown earthworks in the upper Amazon basin, near the borders of Bolivia and Brazil.

Wide-scale forest clearance for agriculture has revealed 200 enclosures and the archaeologist who first made the discovery – Alceu Ranzi – believes that there could be as many as 2,000 or more such sites hidden beneath the jungle canopy across a 250km (156mile) wide region, encompassing the eastern part of the Brazilian state of Acre.

Recognising them as the work of a pre-Columbian society, Ranzi has dubbed them ‘geoglyphs’ (literally ‘earth drawings’) because they consist of squares, circles or composite shapes, linked by a network of avenues. ‘Their perfect geometry speaks of their symbolic significance, regardless of whatever other functions – perhaps as defended settlements – they performed,’ says Ranzi.

Reporting the discovery in full in the December 2009 issue of Antiquity, Ranzi and his colleagues, Martti Pärssinen and Denise Schaan, say that a typical enclosure is formed by a ditch approximately 11m wide, currently 1-3m deep (but originally 4-5m deep), with adjacent 0.5-1m high earthen banks, formed from the soil excavated from the ditch. Ring ditches have diameters that vary from 90m to 300m and are more common in the south, while composite figures, consisting of a rectangle inside a circle or vice versa, become more frequent as one moves north. The structures are linked by embanked roads.

Small excavations done in 2008 at Fazenda Colorada found evidence of permanent habitation, along with many low mounds containing domestic ceramics, charcoal, dust and grinding stone fragments. A charcoal sample from Fazenda Colorada gave a date of around AD 1283, which, say the authors, ‘is consistent with the development of complex societies in other areas of the Amazon between AD 900 and 1400’. The authors also believe that geoglyphs were deliberately sited on the edges of plateaux above river valleys so as to have a supply of fresh water and ‘a privileged view of people coming up the river’.

Research continues to date the structures, understand their function, and to learn more about the people who built and occupied them, perhaps over a period of many centuries.