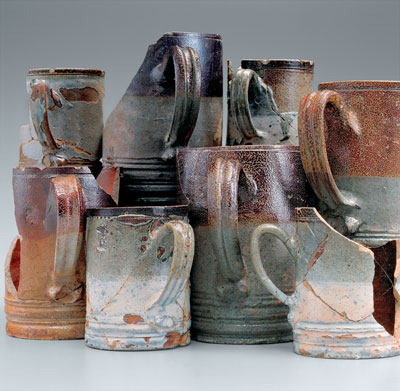 Archaeologists in Yorktown, Virginia have found a well-preserved kiln site manufacturing fine stoneware pottery at a time when colonial pottery-making was banned: the illegal pottery was set up as a sign of the growing American desire for economic independence from the British Crown, and a desire to end the imposed reliance on imported British-made goods.

The remains of the kilns, which date from the early 18th century, are far better preserved than many similar sites in the pottery-making centres of Britain, and the pottery found at the site, in the form of ‘wasters’, or pots that broke during firing, show that the quality of the pottery was as fine as that being produced by any contemporary London kiln.
The existence of such a kiln had long been suspected because of the quantity of pottery found in nearby excavations that could not be traced to a British source. It was only by accident the actual site was found during the redevelopment of a modern garage site; its survival is due to the fact that much of Yorktown is undeveloped.

Archival research has brought to light some of the site’s history: the owner in 1711 was William Rogers, originally from Southwark (in those days a London suburb), who founded a successful brewery selling ale to many of Yorktown’s taverns: the stoneware tavern mugs he made complemented his brewing trade, though he also made teapots, storage jars, and cooking pans.

Writing about the excavation, Robert Hunter, editor of Ceramics in America, says that Virginia’s Royal Governor seems to have been sympathetic towards Rogers’ pottery, even though he was acting contrary to British laws. Governor William Gooch referred to Rogers as a ‘poor potter’ in his annual report to the Board of Trade in 1731, Hunter says, ‘thus downplaying the potential threat to the Crown’s trade interests, even though Rogers’ business was by then anything but poor: his wares accounted for a sizeable proportion of all the utilitarian wares being used in the region’s taverns and homes at the time’.