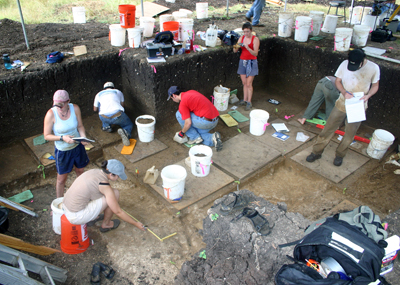 First ‘unequivocal proof for pre-Clovis occupation of America’ has been found by researchers at Texas A&M University.

Flint knife blades, chisels, and other human artefacts were discovered in sediments that were last exposed to sunlight between 15,500 and 13,200 years ago, according to luminescence dating. These same sediments are also stratigraphically earlier than the layers containing Clovis-type tools at the same site. Until now, the oldest firmly dated human material found on the continent of America comes from the Clovis site, in New Mexico, and is c.13,000 years old.

The newly dated material comes from the Buttermilk Creek Complex at the Debra L Friedkin site, about 40 miles north west of Austin, in Texas. Michael Waters, who led the research team, described the 15,528 chert artefacts found in a 50m² block at the site as consisting mostly of ‘chipping debris from the making and re-sharpening of tools, but over 50 are tools.’ He added: ‘There are bifacial artefacts that tell us they were making projectile points and knives at the site. There are expediently made tools and blades that were used for cutting and scraping.’

Waters does not believe that the tools, which are noticeably different in form and style from Clovis technology, are necessarily the work of a different people. ‘This discovery provides ample time for Clovis to develop. People [from the Buttermilk Creek Complex] could have experimented with stone and invented the weapons and tools that we now recognise as Clovis,’ he said. Waters does, however, believe that ‘it is now time to abandon once and for all the “Clovis First” model and develop a new model for the peopling of the Americas’.

The Clovis First model envisages a population from north-eastern Asia migrating to North America around 13,000 years ago by crossing the Bering Land Bridge, spreading out across the northern and southern American continents and bringing their Clovis-type tools with them. For various reasons, this model is problematical, not least because Clovis-style tools, with their distinctive fluted points, have never been found in Asia. Moreover, those that have been found in Alaska, along the Bering Land Bridge route, are too young to be associated with the putative first migration.

Waters suggests that Clovis tools developed after the first migrants had reached the American continent, and that the migration (or migrations) occurred earlier than the Clovis model proposes. Some of the pre-Clovis bladelets found at the Buttermilk Creek site do show similarities with bifacial tools found in Asia, supporting an Asian origin for the first migrants, but, as Waters points out, tools from that period in Siberia and north-eastern Asia are relatively rare in any case.

Several other sites in America have already produced stone tools that have been given pre-Clovis dates, including two in Wisconsin, one in Pennsylvania, and one in Oregon; in each case the dating has been challenged – as has the dating of stone tools from Monte Verde, Chile – placing them 14,100 to 14,600 years ago. The cumulative evidence from all these sites does begin to suggest that humans were living in the Americas some time before the Clovis tradition emerged.

Waters himself believes that the first migrants did not walk from Siberia, but came by skin boats at least 16,000 years ago, hunting seals along the coastlines of the Aleutian Islands, Alaska, Canada, and America. He thinks the first colonies in America probably lie along the Columbia River basin between Washington and Oregon, a region, he says, that ‘archaeologists should re-explore with renewed vigour’.

The tools found in Texas are small and thin flint blades, used to shape bone and wood, probably to make spear points. Some of the carving tools had notches with convex edges; some had edges dulled from scraping hard surfaces. Amongst the tools was a golf-ball-size nodule of hematite, worn flat on several sides; ground to a powder and mixed animal or plant oils, the resulting red ochre was probably used as body paint or to decorate spear shafts or clothing.