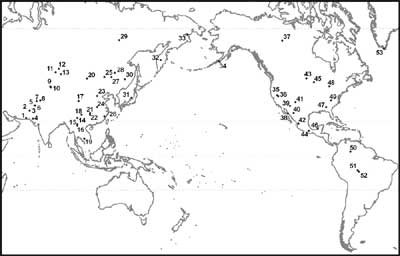 Contradictory data have fuelled a debate in America concerning the dates of migrations from Asia into the American continent, whether migration took place just once, or on numerous occasions, perhaps even before the last Ice Age, and whether today’s Native American people derive from one ancestral population or several.

A recent DNA study appears to settle the question: ‘our work provides strong evidence that, in general, Native Americans are more closely related to each other than to any other existing Asian populations, except those that live at the very edge of the Bering Strait,’ says Kari Britt Schroeder, of the University of California, Davis, one of the authors of a paper in the May issue of the journal Molecular Biology and Evolution. A specific genetic marker, dubbed the ‘9-repeat allele’, was found in all of the 41 populations that they sampled from Alaska to the southern tip of Chile, as well as in Inuit from Greenland and the Chukchi and Koryak people native to the Asian (western) side of the Bering Strait.

This same genetic variant was absent in all 54 of the Eurasian, African and Oceanian groups the team sampled. The most straightforward explanation for the distribution of the 9-repeat allele was that all modern Native Americans, Greenlanders, and western Beringians descend from a common founding population. The fact that the allele was absent in other Asian populations probably means that America’s ancestral founders had been isolated from the rest of Asia for thousands of years before they moved into the New World.

‘While earlier studies have already supported this conclusion, what’s different about our work is that it provides the first solid data that simply cannot be reconciled with multiple ancestral populations,’ said Schroeder, who added that unlike many genetic studies that are based on mitochondrial DNA (passed from mother to daughter) or Y-chromosome DNA (passed from father to son), this study ‘is the first definitive evidence we have that comes from DNA that is carried by both sexes.’ •