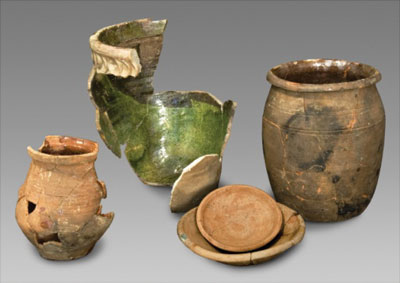 A well shaft that was dug by the first English colonists at Jamestown when they arrived in May 1607 was backfilled in June 1610 because the water had become increasingly salty. The rubbish that went into the well, as part of a clean-up of the triangular fortified site ordered by the English governor, Lord De La Warr, has proved to be a rich source of information four centuries later about the pots that the founders of English America took with them.

Beverly Straube, who has just published a study of the pottery from the well in This Blessed Plot (Paul Holberton Publishing, 2011), says the pottery tells us what Captain John Smith and his co-colonists considered essential to meet their needs when they set sail from Blackwall, in east London, bound for a distant land, the equivalent to a trip to the moon in the modern age.

Sponsorship, it seems, was practised even then, and the bias in the assemblage towards pottery made in London and Essex reflects the keenness with which London tradesmen pressed their goods on the Virginia Company ships, as Smith himself recorded in his account of the voyage. From the Midlands of England came a large number of butter pots, designed to keep butter packed in salt from going rancid; butter, eaten with bread and used for cooking, was typically taken on long-distance voyages at the time as a source of fat and as an appetite suppressant. From south-west England came the tall baluster jars that served as containers for salted and pickled fish, the source of protein on long voyages.

At least some of the earthenware storage jars would have contained cider, often preferred for long voyages over beer because of its keeping qualities. Three-footed cooking pots designed to stand over the hot coals of a hearth to cook potages and stews came in a variety of sizes, from large vessels for communal cooking to smaller individual portion vessels. Ambitiously, the ceramics also included flasks of a type used in refining precious metals, a reflection of the belief that gold lay in abundance at the western side of the Atlantic. None showed evidence of use.