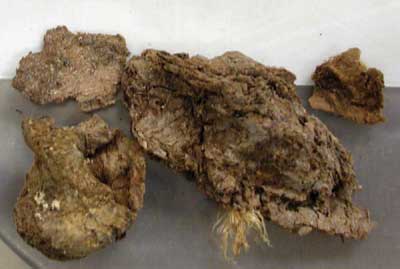 Carbon dates from dried excrement recovered from Oregon’s Paisley Caves show that humans were living on the American continent some 14,300 years ago, according to a paper published in the 3 April 2008 issue of Science magazine. Archaeologists have long debated whether the Clovis people – named after Clovis, New Mexico, where the characteristic stone spears and tools that define the culture were first recognised – were the first inhabitants of the Americas. Professor Eske Willerslev, of the University of Copenhagen, one of the authors of the Science paper, says the Oregon cave finds predate the oldest radiocarbon dates for Clovis culture by 1,300 years.

DNA tests conducted on the coprolites confirmed that they came from Asian migrants but, said Professor Willerslev, the dates challenge current views on the route of the migration. At this date, the route from Siberia to Alaska was covered by an ice cap formed by the convergence of the Laurentide and Cordilleran ice sheets. ‘Our findings show that there were people south of the ice cap several hundred years before an ice-free corridor developed’, he said. ‘The first humans either had to walk or sail along the American west coast to get around the ice cap, unless they arrived so long before the last ice age that the land passage wasn’t yet blocked by ice.’

The coprolites form part of a remarkable collection of organic objects originally discovered in field trips to the caves led by Dennis Jenkins, senior archaeologist with the University of Oregon’s Museum of Natural and Cultural History. The stable dry conditions in the caves had preserved cords made of twisted sinew and plant fibres, animal hides, basketry and wooden pegs, as well as animal bones and projectile points.

At the same level as the earliest of the coprolites (2m below the modern surface) the excavation team found a small rock-lined hearth and a large number of bones from waterfowl, fish and large mammals, including extinct camel, horse and mountain sheep. Samples from the bones produced carbon dates consistent with those of the coprolites.

Located near the modern village of Paisley (population 300), the caves once overlooked a broad grassy plain cut by the Pleistocene Chewaucan River, which flowed north into the Summer Lake basin, a perfect spot to search for the evidence of early migrants. •