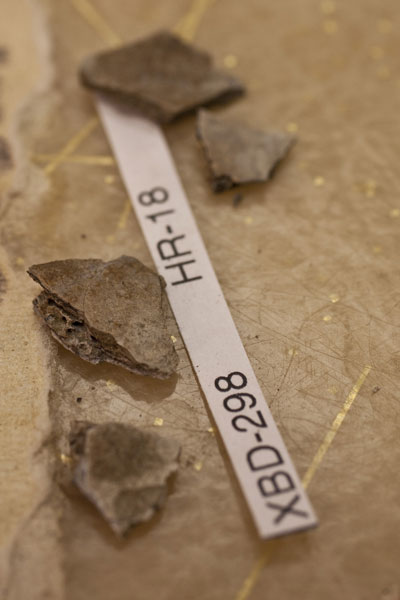 In Alaska, the cremated remains have been found of a three- year-old child who might have been one of the earliest inhabitants of North America to arrive via the land route. University of Alaska Fairbanks archaeologist Ben Potter and four colleagues found the remains while excavating a fire pit within an ancient dwelling at the Upward Sun River site, near the Tanana River in central Alaska. Radiocarbon dating of wood at the site indicates the cremation took place roughly 11,500 years ago, when the Bering Land Bridge may still have connected Alaska and Asia.

The child’s remains were found in the uppermost part of the pit, above the remains of small mammals, birds, fish, and plants. The researchers believe that the pit was originally used for cooking and as a means of disposing of food debris for several weeks or months before being used as a cremation pit after the death of the child. The remains of the child were then covered over and the house abandoned.

The house floor was dug about 27cm below the original ground surface; stains in the sediment suggest that poles may have been used to support the walls or roof, though it is not clear what the latter were made from, and the house has yet to be fully excavated, so its total size is still unknown. The oval-shaped pit was about 45cm  deep and the identifiable food bones include salmon, ground squirrel, and ptarmigan. Buried with the child were two pieces of red ochre, the significance of which is unclear.