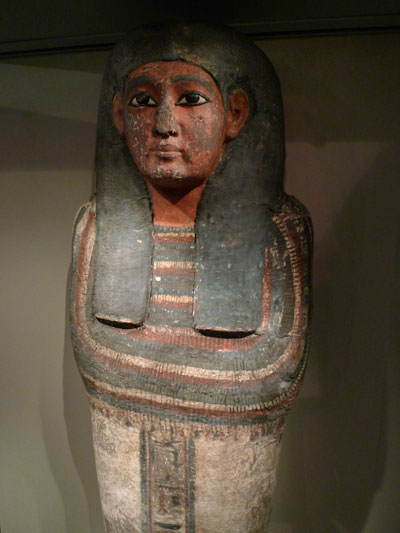 In the museum world’s equivalent of finding an heirloom in the attic, the curators at Torquay museum discovered they own an ancient Egyptian sarcophagus that was intended for royalty.

The coffin, carved from a single piece of cedar, was originally believed to date from c.700 BC; it had been re-used 200 years later to hold the mummified remains of a three- or four-year-old boy. In fact, it is 3,500 years old, and had originally been made for a very high- status boy, possibly even royalty.

Aidan Dodson of Bristol University, who is cataloguing every Egyptian coffin held by English and welsh museums, said: ‘when I walked into Torquay museum for the first time, I realised that the coffin was something really special. Cut from a single log of cedar wood, it is exquisitely carved, inlaid, and painted. For a child to have been given something like that he must have had very important parents – perhaps even a king and queen.’ The original inscriptions are too damaged to make out the name of the child, but the coffin dates to c.1525-1470 BC, linking it to the 18th dynasty, the same royal house that produced such famous pharaohs as Akhenaten and Tutankhamun.