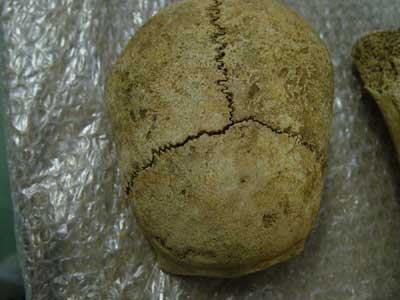 I have been working with prehistoric skeletons from the Caribbean (Hispaniola, Puerto Rico and the Bahamas), South America including Peru, Medieval Britain, and Pre-Columbian remains from Miami and the American Midwest. During the course of my research I have realized that differing patterns of suture closure are not necessarily related to the age of the deceased.

The human skull is made up of separate plates that allow the skull to pass through the birth canal. As we age, the plates grow closer together and the edges interlock; these lines are termed ‘sutures’. Each suture has a specific name. It has long been thought cranial sutures close predictably in adulthood; in fact, the development of immature limb bone segments into mature bones and the systematic fusion of the cranium are considered analogous. Physical anthropologists have noted the typical order in which each named suture fuses, even as they have realized there is variation between individuals.

In forensic cases, an accurate age at death is imperative for positive identification, and for archaeological remains it enables us to make assumptions about life in the past. Though some have begun to question the usefulness of age estimates based on suture scores, the method remains taught in classrooms and advocated in the literature as at the very least a supporting tool for estimating age.

I was taught the order in which the sutures fuse, and how to score areas of fusion along a single suture. However as I examined more and more collections I began to notice startling inconsistencies between what I had been taught and what I was seeing, such as inter-population differences in pattern and timing of suture closure when working with medieval Britons as compared to the Taino of Puerto Rico. Perhaps regional similarities are due to genetics, local birthing practices, common work loads and environments, but so far we are not sure. However, it does seems that fusion can be brought on prematurely by ‘birth trauma’, and perhaps by the cultural practice of head-shaping.

Moreover, though we can discern regional patterns of suture closure, the rates also differ between males and females. But while some studies argue that male sutures fuse earlier, others note that females’ fuse first. Compellingly, workers have also noted many examples of elderly individuals having unfused skulls and younger individuals having premature suture closure. One study comparing suture fusion with known age included four Dutchmen with recorded ages of over 100 years-and who retained completely open sutures.

Cranial suture closure therefore is not an accurate method of aging human remains but rather is a method fraught with inconsistency, where the variables include sex, biocultural practices, geographical region and even happenstance. Closed sutures only seem to indicate an individual has reached adulthood. Once sutures have fused, that is it: they will be scored as fully fused-and yet the individual may have lived for many more years. Or, they may have promptly died.

The take away message? Focus on other ageing methods more than counting up sutures scores. For all I know, my skull is one solid ball of bone already!