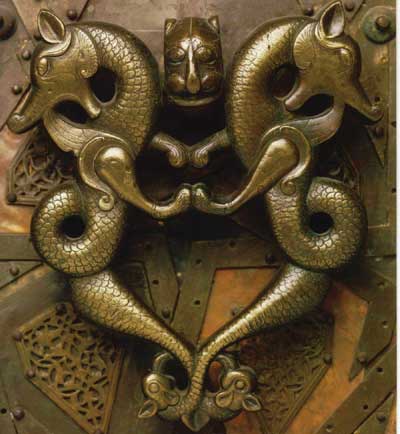 Who were the Turks? A new exhibition at the Royal Academy (Piccadilly, London) presents Turks: A Journey of a Thousand Years 600 – 1600, and remains open until 12th April 2005. It is a stupendous exhibition – even though one suspects that there may be political overtones in Turkey’s recent application to join the European Union. But how far does it hang together? How far can one see a sequence leading from AD 600 to 1600?
For me, the exhibition fell into three sections. The first concerned the origins of the Turks in Central Asia. Here the exhibition was, I felt, somewhat swayed by the sources, for so many of the objects came from what is today Eastern China, that is, the caves at Xinjiang, which gave it an excessively Chinese feel. I did not quite understand how the Turks came together, how far they were descended from the Scythians and the Sarmatians, and the reasons behind the rise of the Uighurs. The object that I liked most was this 12th century statue showing a woman carrying a jar against her belly: it comes from the Polovets, a tribe well known to opera lovers for their energetic dancing.
From the 10th century onwards the Turks began to move westwards, headed by the Seljuks, first into Persia and then later into the eastern part of Turkey itself with their chief town at Konya. At the same time the Turks were converted to Islam, and one of the impressions I received was of the tremendous power and influence of Islam at this time which permeated all other art styles with which it came into contact. Indeed, artistically it was much more potent and influential than was Christianity at that time. The Arabic script too was taken up with great enthusiasm and I could not help wondering whether this is not perhaps the most beautiful of all scripts, particularly when written by the great medieval masters. And of course there is the colour, and the mastery of kiln technology which produces the wonderful tiles which make the best Turkish/Muslim architecture so glorious.
An unexpected delight was a whole room devoted to the work of Mohammed of the Black Pen. There seems to be some doubt as to whether he actually existed – all the works on show are attributed to his followers – but there are apparently two folios in the Topkapi Museum in Istanbul dating to the 13-15th century devoted to his work. The works clearly derive from somewhere in Central Asia, but they have a very distinctive cartoon style, varying from grotesque demon figures to some stunning illustrations of everyday life. They deserve to be better known.
The third great surprise for me were the Ottoman Turks, who although they began in the 12th century, only really came to prominence following the capture of Constantinople in 1453, which was followed by their conquest of the Balkans and spread to the very gates of Vienna. Artistically too they were extremely brilliant: I had not realised the tremendous part played by flowers and floral designs in their art, notably in the magnificent carpets which have had the greatest influence as can be seen in the floor coverings of so much of the western world. Next time you admire a magnificent carpet, see how many of the motifs have floral designs: if the stems have a jagged floral outline, this is the lingering Ottoman influence.
This was a magnificent and sumptuous exhibition accompanied by a splendid catalogue entitled Turks, edited by David Roxburgh with superb colour photographs of virtually all the exhibits, though some of the earlier introductory essays are a little over-historical rather than archaeological. (Royal Academy of Arts, £50 hardback, £27.95 paperback only from the exhibition). There is also a splendid website, www.turks.org.uk.