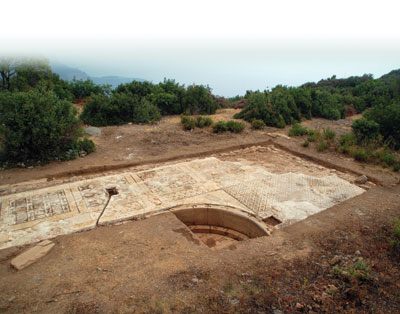 Excavations in southern Turkey have uncovered a huge Roman mosaic, suggesting that Imperial culture was more influential on the edge of the empire than previously thought.

Decorated with large squares, each filled with a colourful geometric design, the mosaic was part of a baths, lying alongside a 25ft-long (7.5m) marble-lined pool, and is thought to date to the 3rd-4th century AD. About 40% of its surface has been uncovered so far, but University of Nebraska-Lincoln (UNL) archaeologists expect the full floor to measure around 1,600 square feet (nearly 150 square metres) – making it the largest found in the region.

Since 2005 UNL, researchers have been excavating at Antiocha ad Cragum, a city founded by a client-king of Rome in the middle of the 1st century AD. The site was thought to be a settlement right on the periphery of the Roman Empire, but successive digging seasons have uncovered evidence that the city was much more Romanised than expected, revealing temples, baths, and colonnaded streets.

‘This region is not well understood in terms of history and archaeology, and it is not a place in which archaeologists have spent a lot of time, so everything we find adds more evidence to our understanding of this area of the Roman Empire,’ said project leader Prof. Michael Hoff. ‘We are beginning to understand now that it was more Romanised and more in line with the rest of the Roman world than was suspected before – and the mosaic hammers home how Roman this city truly is.’

He added: ‘Its size signals, in no small part, that the outward signs of the Empire were very strong in this far-flung area,’ Hoff said. ‘We were surprised to have found a mosaic of such size and of such calibre in this region – it is an area that had usually been off the radar screens of most ancient historians and archaeologists, and suddenly this mosaic comes into view and causes us to change our focus about what we think [the region] was like in antiquity.’