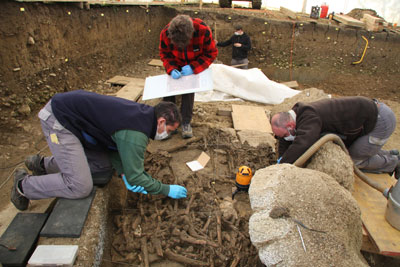 Excavations in Switzerland have revealed the first intact Neolithic burial chamber north of the Alps. The dolmen, at Oberbipp in the Canton of Bern, contains the remains of at least 28 individuals dating to about 5,000 years ago.

Marianne Ramstein, director of excavations, explained that examples of such burial chambers are rare, most are in very poor condition, and few retain skeletal remains.

The Neolithic dolmen came to light in 2011 when a farmer decided to move a 7-tonne granite rock that was hampering mowing in his field. The huge boulder, the result of glacial movements about 20,000 years ago, measures some 3m by 2m (10ft by 6ft 6ins) and is about 1m (3ft) deep.

So far, the remains of 28 individuals have been recovered, along with grave goods that include flint arrowheads and knives, some pendants made from animal teeth and sea-snail shells, and a bead, probably limestone. The bones have been removed for further analysis and radiocarbon dating, which Marianne Ramstein hopes will reveal who these people were, and when and how they were buried.

She told CWA: ‘We believe these individuals were interred individually over a period of time – but as yet we have no proof for this hypothesis. We hope that radiocarbon dating as well as analyses of aDNA and stable isotopes help us to find the answers.’

Though no local settlement associated with the dolmen has been found so far, scattered finds of flint artefacts from the surrounding area may be evidence for one in the area. Finds dating to the Bronze Age and the Roman and Medieval periods were also found overlying the Neolithic layers – suggesting that during this time the structure was still visible above ground.