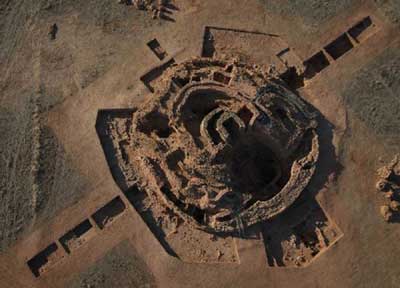 The brochs of Northern and western Scotland form some of the most remarkable and distinctive defensive structures in Europe.
Now a similar, though much earlier form of structure has been discovered in Spain at the settlement of Motilla del Azuer (Daimiel, Ciudad Real), located in the central area of the Iberian Peninsula.

Artificial mounds known as motillas are found throughout the plain of La Mancha. Dated to between 2200 and 1500 BC, they tend to be situated 4-5km from one another and rise to 4-10m high. People have written about motillas since the end of the 19th century but they were erroneously considered to be burial mounds until the mid 1970s when work began on the Motilla del Azuer.

The excavations at Motilla del Azuer, directed by Profs Trinidad Najera Colino and Fernando Molina Gonzalez, have revealed that this motilla was in fact a fortification surrounded by a small settlement and a necropolis. It is the first site of its kind to be excavated in a scientific and systematic way. The first research phase took place between 1974 and 1986; following a break, fieldwork then restarted in 2000 and is still in progress. Their work has revealed that Motilla del Azuer’s fortification mound measures about 50m in diameter with two walled enclosures and a large internal courtyard. In its centre stands a stone tower, quadrangular in shape and with walls measuring over 10m high. The walls have various reconstruction phases indicating that they were built and rebuilt during the whole occupation of the settlement. Access to the tower is by ramps located in narrow corridors.

Motilla del Azuer contains the oldest well known from the Iberian Peninsula and the archaeologists suspect that the walled enclosures were therefore used to protect and manage the livelihood of the people living in the settlement: to secure the well’s water, to store and process cereals on a large scale, to occasionally keep the livestock, and to produce pottery and other domestic artefacts.

The extra-mural settlement area spans a radius of c.50m. The people lived in oval and rectangular dwellings built with stone foundations and mud walls that tend to be associated with timber posts. There are wide open-air spaces between the houses that often contain high concentrations of pits, ovens and hearths related to storage and production activities. In one area the archaeologists even found large pits for animal waste. The erstwhile locals seemingly had a penchant for horses – the team found a high percentage of horse remains, mostly hooves, skulls, large bones and jawbones, probably from the butchering of these animals.

A necropolis is located within the settlement area. This is a usual feature of the Bronze Age on the Iberian Peninsula. Typically the archaeologists found individual inhumation in pits, occasionally covered with stonework or slabs.

The excavations at Motilla del Azeur have thus been most fruitful. In addition to excavation, several works of consolidation and restoration have been developed since plans are afoot to open the site to the public.