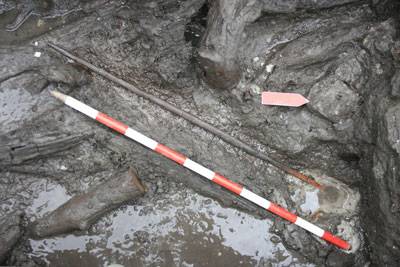 The excavations at La Draga in Spain – which is among the earliest known agricultural settlements on the northern Iberian Peninsula – have uncovered the oldest complete Neolithic bow to have been found in Europe.

Dated by its context to c.5400-5200 BC and made of yew wood, the bow was found by Autonomous University of Barcelona archaeologists on the shore of a lake where anaerobic soil conditions have led to exceptionally well-preserved organic remains.

Fragments of two more bows of a similar age were previously found at the site in 2002 and 2005, but now archaeologists hope to be able to use the 1.08m artefact to reconstruct how these implements may have been used.