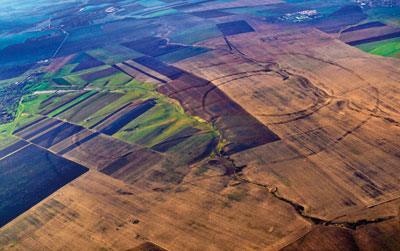 A massive Late Bronze Age (1500- 1100 BC) fortified settlement in Romania is under threat from intensive agriculture, according to archaeologists from Romania, Germany, and Britain. Funds are urgently needed for excavation before the site at Cornesti-Iarcuri is ploughed out.

The site, located in the plains of the Banat in western Romania, is almost 6km across, dwarfing any other known prehistoric settlement in Europe. Parts of the site were mapped as early as the 18th century, and excavation work began in the 1930s, but it was brought to an abrupt end by the outbreak of World War II.

Recent survey work has revealed the full extent of the settlement for the first time, showing that it consists of four nested enclosures, each surrounded by a rampart. The innermost rampart, with a diameter of 1km, is almost circular and is flanked to the north and south by two valleys, while the outermost rampart encloses more than 1,700ha – an area so large that its extent can only really be grasped when looking at the site from the air.

The excavators believe that its primary role was not military: the sheer scale of the ramparts, the location of the site, and the number of gates set in the enclosure banks would have made defence impracticable. The authors of a paper in Antiquity instead suggest that the settlement was a demonstration of power and prestige.

Archaeological investigation of the interior revealed timber houses built c.1393-1314 BC. The small excavated area showed evidence for dense occupation but it is considered unlikely this could apply to the entire area as it would imply a huge population. Certainly, the effort needed to construct such a site not only suggests the involvement of large numbers of people but also a command structure and social hierarchy on a scale so far unheard of in Bronze Age Europe.