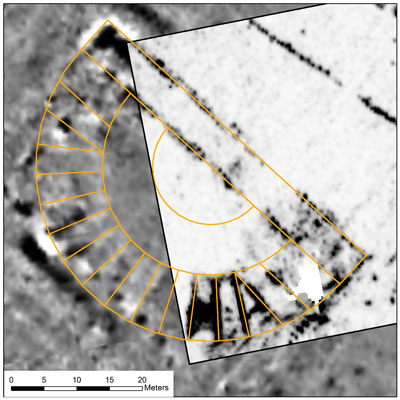 Archaeologists have mapped the entire streetplan of a lost Roman town, revealing that what was thought to be a sleepy backwater was in fact a thriving urban centre housing thousands of people.

Interamna Lirenas was founded 50 miles south of Rome in the 4th century BC, but following its abandonment 1,500 years ago the colony was plundered for building materials and no trace survives above the surface. Antiquarian research recorded that a settlement had existed on the site, but no modern investigation had ever taken place.

Now, geophysical investigations led by the University of Cambridge and the Italian State Archaeological Service have uncovered the town’s complete plan, covering an area of 25ha.

The settlement was arranged around a large central forum, and had a theatre dated by its structure to the start of the 1st century AD. Large public buildings such as this suggest that, far from being an insignificant settlement, the colony was a major economic and social centre.

‘Having the complete streetplan and being able to pick out individual details allows us to start zoning the settlement and examine how it worked and changed through time,’ Professor Martin Millett of the University of Cambridge said. ‘It shows that this was a lively and busy place, even though most scholars have reckoned that it was marginal and stagnating.’

The wealth of information provided by these images has also allowed researchers to compare Interamna Lirenas to other Roman colonies, prompting them to reassess traditional views of these sites.

Until recently, scholars believed all Roman colonies followed a standard template so that Rome could project a certain image of itself onto a subject population. Interamna Lirenas shows that the reality was not so simple, however, as its layout is markedly different from another nearby colony, Fregellae.

‘The new pictures from Interamna Lirenas show how different towns were designed according to different ideas about how a colonial town should look, and what the community’s priorities should be,’ said Professor Millett.

The Cambridge team are now about to launch a five-year project to investigate these ideas further, and the first excavation of Interamna Lirenas is being planned.