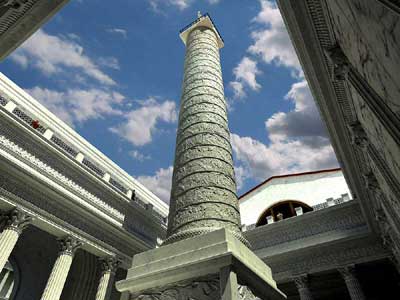 Visitors to Rome from 2009 will be able to see Trajan’s Column as it was meant to be seen when erected in AD 113 (see image), a riot of primary colours, turning the stately marble column of today into a multi-coloured cartoon. ‘The column, like many other statues of antiquity, was a carnival of colour’, said Maurizio Anastasi, of Rome’s Archaeological Superintendency.

The monument tells the story of Trajan’s triumphant campaigns in Dacia (modern Romania), in a relief sculpture that spirals 23 times around the 35m high marble column, which will have its colour restored by ‘painting’ it with computer-controlled light projectors and high-definition templates. ‘For a few minutes every hour at night people will be able to see the monument as it appeared to the ancient Roman world,’ Anastasi said.

The column’s illumination is part of a wider scheme to use light to greater effect throughout the Roman Forum. According to Corrado Terzi, Professor of Industrial Design at La Sapienza University, Rome, ‘Light will be turned on at different times to produce a more readable and evocative view of the entire area’. •