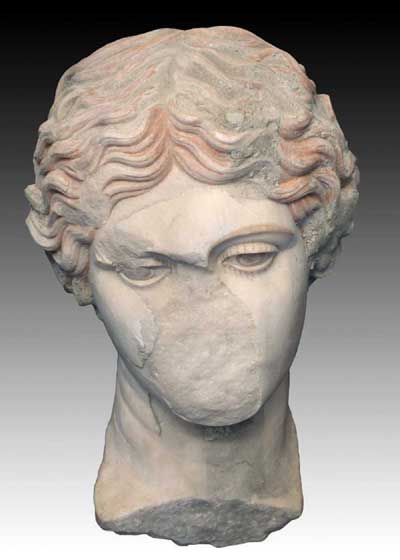 Archaeologists have recovered a remarkably well preserved marble head from Herculaneum, the iconic South Italian site. The female head, formed from white Pentelic marble, is an exceptional example of a classical statue found with its painted pigments fully preserved.

The head was discovered in the Basilica of Nonius Balbus, the public building constructed in the Augustan period by Marcus Nonius Balbus in the northern limit of insula VII. Archaeologist Domenico Camardo dug it out of a collapsed escarpment, buried in a deep layer of volcanic material, during new cleaning and stabilisation of the building.

The head once formed part of the sculptural decoration of the basilica and, like many features of the city, seems to be associated with the mythical founder of Herculaneum: Hercules. The painted head is interpreted to be that of an Amazonian warrior – in Hercules’ ninth task of the 12 labours, he had to fight Hippolyte, the Amazonian Queen. A number of other sculptures, and a frieze showing episodes of the lesser labours of Hercules accompanied by Greek inscriptions, were recovered from the Basilica in the 17th century during the ‘treasure-hunter’ Bourbon exploration of the site by tunnel. These are now held in the National Archaeological Museum in Naples, but none compares to the newly-found Amazon in terms of preservation.

Though the Amazon’s nose and mouth are missing, her painted hair, pupils and eyelashes appear to be as pristine as they were on the day that Herculaneum was overwhelmed by the eruption of Vesuvius in AD 79.

The delicacy of the decoration comes as something of a surprise. Although it is known that Roman statues were often painted, before this discovery only faint traces of pigment had been found, and it was usually assumed that classical statues were painted brightly. In fact, the colouring on this head is a soft shade of orange-red, which, although it may have somewhat faded in antiquity, indicates that classical colouring could be subtle.

This exceptional find was made during a campaign of emergency conservation works of the Herculaneum Conservation Project (HCP), a Packard Humanities Institute project in close collaboration with the Soprintendenza Archeologica di Pompei and the British School at Rome. The Amazon is currently undergoing initial investigative work and cleaning of the residual volcanic material by members of the technical and scientific staff of the HCP. The head will subsequently be surveyed and displayed in the museum of Herculaneum.