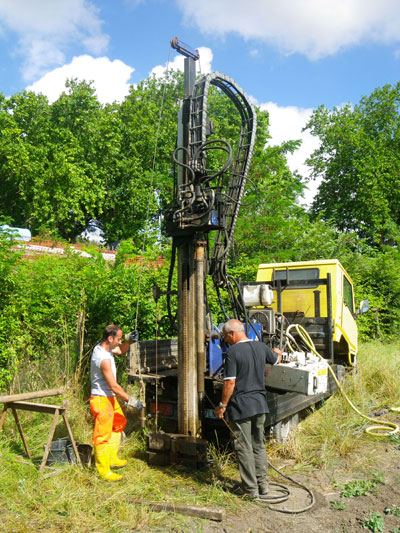 A team of French and Italian archaeologists have announced the discovery of the lost harbour of Ostia, once ancient Rome’s primary seaport.

The commercial centre was founded beside the Tiber in c.620 BC to give Rome an outlet to the sea and guard against enemy fleets entering the river. According to contemporary writers such as Strabo, however, Ostia was abandoned when her harbour silted up in the 1st century AD, and a huge new complex was built 3km (2 miles) to the north at Portus (CWA 51).

While past excavations have revealed many of Ostia’s buildings and roads, the site of the harbour itself remained unknown – but now investigations led by Jean-Philippe Goiran of France’s National Centre for Scientific Research (CNRS) have located the harbour to the north-west of the city, on the left bank of the rivermouth.

With waterlogged conditions making deep excavation difficult, the team instead extracted two sediment cores providing layers of deposits 12m (39ft) deep. Those dating to the 4th-2nd century BC were rich in grey, silty clay, pointing to a typical harbour. Analysis of these indicated that Ostia’s harbour had once boasted a basin 6.5m (21ft) deep – the same as at Portus – shaking previous assumptions that this had been a shallow river port only capable of accommodating low-draft boats.

The cores also confirmed historical accounts of Ostia’s harbour being choked with silt, showing that major floods had filled the basin with sediment in the first quarter of the 1st century AD, reducing its depth to 0.9m (3ft) and making navigation impossible.

‘The harbour’s depth was an unexpected bonus,’ Jean-Philippe told CWA. ‘We had thought that it would be at most 3-4m (10-13ft) deep, meaning that large merchant ships would have had to keep at a distance, with smaller vessels bringing their cargo to the port. But now Ostia can be entered in the category of deep ports, capable of receiving big seagoing boats.’