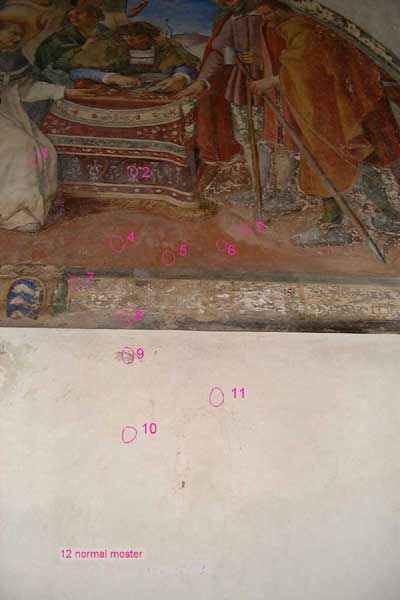 When Florence was hit by disastrous floods in 1966, art conservation experts rushed to the city to save as many priceless pieces of art as they could. Now Florentine scientists have developed a tool to help restorers preserve Italy’s many precious fresco paintings without causing any damage to the paint itself, as outlined in the August 2006 issue of the journal Measurement Science and Technology.

Frescoes face two main hazards: moisture from the atmosphere and salts in the plaster of the walls on which Renaissance masters made their original paintings. The new tool known as SUSI, Sensore di Umidita e Salinita Integrato, which literally means ‘sensor for humidity and salinity integrated’ can measure both moisture and salt content to a depth of two centimetres below the surface. This information could be vital to restorers in deciding the best way to save a painting.

SUSI is a computer-based portable sensor system designed to ‘feel’ below the surface of a 500-year-old work of art. “Moisture and salts are the nemesis of frescoes, and their presence should be detected before damage become too serious”, said Roberto Olmi, who led the team of physicists that developed SUSI at the National Research Council in Florence, Italy. “At the beginning of the 20th century, for example, in order to save the paintings a technique used by restorers here in Italy has been to detach the whole thing from the wall and mount it on a wooden board called a Masonite support.An early detection of moisture behind the paintings using SUSI would have avoided such an invasive and dangerous procedure”.

Fresco means ‘fresh’ and fresco painting was a test of an artist’s skill: he and his pupils had to get their water based pigments onto the newly-plastered walls before the plaster dried: only then would the paint stick. But the twin threats of time and tourism have, over the centuries, helped to deface their legacy. Moisture can damage a fresco in two ways. Water flows to the surface and evaporates, taking bits of the paint with it. Water can also transport soluble salts from the plaster of the wall to the surface, where they crystallise. Eventually the painting whitens and begins to fall off the wall. Until now, measurements of the water and salt content of a fresco have only been possible by taking samples of the paint or drilling holes through the painting to obtain a sample of wall plaster. Paradoxically, just to assess a painting’s condition, researchers had first to damage it a little. The new SUSI tool could now offer researchers the opportunity to obtain the data they need without damaging the fresco. The surface of the painting is scanned with a sensor device the size of a video camera. Water and salt molecules in the plaster absorb the microwave radiation: then the scanner registers the returning signal and the computer determines the level of moisture or salinity. The equipment was developed over two years, first in a laboratory using plaster samples prepared by the restorers of the Opificio delle Pietre Dure – the Factory of Hard Stones – and then on real frescoes, mainly in Florence. So far the scientists have tested their new detector on such frescoes as the Paradise Wall of the chapel of Santa Maria Maddalena de Pazzi, painted by the studio of Giotto; and the frescoes in the cloister of St Antonino at the Convent of St Mark, painted by Bernardino Pocetti, both in Florence. The technology could be versatile, says Dr Olmi.

“We have also started to refine the device for use on other types of art. For example, we have used SUSI to measure the humidity and salt content of the famous Robbiane ceramics in the sanctuary of La Verna in Arezzo. However, paintings and old parchment are too thin for the device at the moment and we will need to refine it before we can use it on these kinds of works.”