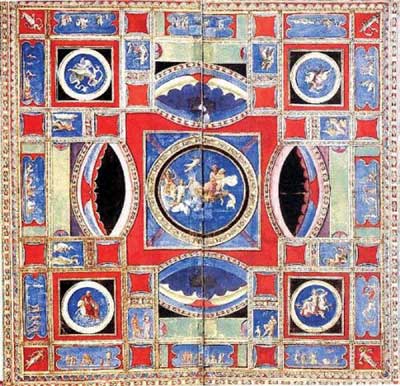 The palace of the Roman emperor Nero, the Domus Aurea, or Golden House, has been closed due to heavy rains that fell in December 2005 which threatened to bring down parts of the building, requiring its closure until further notice. It is unclear how long the major tourist attraction will be closed as funds are being sought (five million euros will be needed), although Culture Minister Rocco Buttiglione estimated that the necessary works to secure the unsafe areas and make it ready to reopen would take two years.

This comes as a real knock to the palace, which prior to its closure was drawing an average of 1,000 visitors a day. Visitors were drawn by its remarkable history and reputation for opulence.

Commissioned by the decadent Emperor Nero, who took advantage of the fire of AD64 that destroyed much of Rome to expropriate land, it extended from the Palatine to the Esquiline hill. The sprawling palace – boasting a collection of nymphaeums, banqueting rooms, bath houses (of which 142 survive today) – was called the Golden House because of the amount of gold leaf which adorned much of it.

Nero’s obsession for dining can be clearly seen in the surviving wing of the palace, as an entire floor was given over to luxury dining rooms. One huge room had its barrel vault decorated with pumice and mosaic to appear like a cave, while the diners were surrounded by fountains and pools. Another room, the façade of which was coated with solid gold, showered visitors in flower petals and perfume as they entered. The palace’s vaulted ceilings were reported to be encrusted with pearls and covered in ivory, and its labyrinth of passageways are still lined with frescoes. The legendary grounds covered a square mile and contained vineyards and game.

However, the people of Rome hated the palace which sprawled over a huge area of their city. The Emperor Vespasian and his successors played on the unpopularity of Nero to demolish large parts of the Domus Aurea and constructed public buildings on the site, in this way they gave back to the Romans what Nero had taken away: the palace’s huge lake was drained and the Colosseum was built on the lake bed. Trajan’s bath complex used the foundations of the palace as support, and therefore created the situation that allowed the recently visitable section of the Domus Aurea to survive in that area.

For more than a thousand years Nero’s palace was thought destroyed and then forgotten, until the Renaissance and its reawakening of interest in rediscovering Classical Rome. Painters, such as Raphael, began to explore the old sites. Climbing down ladders into what they believed were caves, or grottos, they found the rooms of the old palace, and walls still adorned with paintings. These they imitated in their own work. In fact, the palace inspired the coining of the word – and associated style – ‘grotesque’ (from grotto). Soon, pagan designs were appearing in paintings and frescoes these Christian artists were carrying out for the pope in the Sistine Chapel and the Logge Vaticane. It remains ironically interesting that the mad, bad, pagan Emperor Nero inspired a new style in ‘Christian’ art.

Preserving the integrity of the rooms and their decorative features has been a long-term problem, they were kept in a controlled atmosphere with a constant temperature of around 10 degrees Celsius (50 degrees Fahrenheit) and 100% humidity. Following 18 years of restoration work the palace was only reopened in 1999, with another brief closure in 2001 after a ceiling collapsed.

Sarah Court, the Scientific Co-ordinator of Italy’s Herculaneum Conservation Project, told CWA that it is not the only archaeological site in Rome to be affected by water problems – a section of the Palatine also collapsed over the winter. ‘Water has proved again to be the most serious cause of decay on archaeological sites. Even after major conservation projects archaeological remains are at risk unless a programme of continuous care is put in place’, she explained.