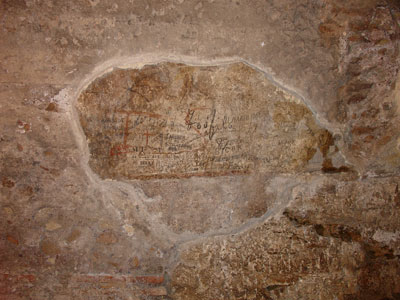 Conservation work on the Colosseum’s only remaining covered passageway has revealed fragments of colourful frescoes and graffiti from the Roman period.

Previously hidden beneath layers of calcified rock and dirt, the red, black, and blue scribbles suggest that the white and grey marble surfaces of the 1st-century AD amphitheatre might once have been much more vibrant in appearance.

They were discovered on the plastered walls of the 61m (200ft) corridor, which spectators would have used to reach the third, highest level, which held the cheapest seats some 18m (60ft) above the arena floor.

The decorations include a red palm frond and two phalluses – thought to represent victory and good fortune, perhaps scrawled by a fan as they went to watch their favourite gladiator – as well as words and symbols yet to be interpreted.

The markings are thought to date from the 3rd century, after the Colosseum was restored following a fire in AD 217. Modern visitors have also made their presence felt, as newly discovered graffiti left by tourists in the 17th-20th centuries attests.

Not all the decorations were unauthorised, however. Conservators have also found evidence of frescoes, a pattern of white leaves on a red background. The presence of blue pigment is also significant, as this colour was expensive and difficult to come by during the Roman period.

‘Blue is not a colour available to just any visitor,’ said Cristiano Brughitta, of the Superintendence for the Cultural Heritage of Rome, ‘but it is seen in ancient paintings. It is evidence for complex decorations on the walls of the Colosseum.’