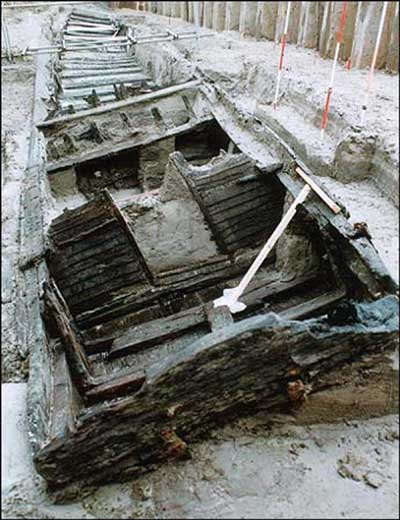 Excavations at the Roman military-fort town of Woerden in the Netherlands have produced a unique discovery: proof of rowers on a Roman barge.
Thanks to its waterlogged conditions, the wooden ship, Woerden 7, remains fairly intact. The ship combines features of both a barge and a gallery, and archaeologists were stunned to discover that the barge was equipped with banks of oars. Holes in the board to which the oars were attached show that there were at least twelve rowers.
The Woerden 7 is now set to challenge current ideas about cargo transport by water in Roman Europe. Before its discovery, archaeologists thought that Roman barges could only sail one way: downstream, on the strong current. Even though they had a sail, it was assumed that boats could not have gone upstream. The ‘combined’ ship at Woerden, with its sails and oars, shatters this theory, since rowing would have allowed the ship to go upstream.
Added to this, Roman vessels were thought to have a short life-span – that they were a type of disposable packaging for the goods within. Once the barges had carried their load downstream, they would be dismantled at their final destination and re-used as building material.
As a result of this remarkable discovery, archaeologists are now also looking into the theory that once the barge had delivered its goods, it would have been re-equipped with oars and reused as a gallery-type patrol ship. Or even, that in the case of the Woerden 7, it might have carried Roman soldiers, rather than goods.
The excavation of the Woerden 7 was completed at the end of October 2003. The results, will no doubt continue to inspire new interpretations and ideas, particularly when put alongside the research already obtained from investigations at the castellum (Roman army camp), the vicus (local settlement), and the former Rhine riverbed at Woerden. For further details, see their website at www.woerden.nl