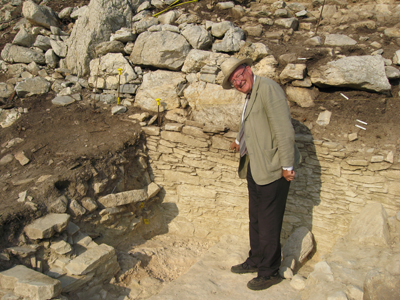 Post excavation analysis of the finds from Professor Colin Renfrew’s excavations on the island of Keros are beginning to throw new light on the enigmatic rituals of the Aegean Bronze Age. The puzzle that Professor Renfrew and his colleagues on the Cambridge-Keros project have been seeing to resolve is not just why the island was used as a burial site for hundreds of fragments of smashed marble figurines, but why only one piece from each figurine was then taken to Keros for burial – and where are the other parts of the smashed statuettes?

Professor Renfrew was originally attracted to Keros in 1963 when, as a young Cambridge graduate, he was intrigued by rumours of recent looting on the almost uninhabited island. He found what appeared to be abundant evidence of illicit excavation, with smashed marble statues and bowls and broken pottery scattered over the hillside.

What only became clear some time later was that the hundreds of body parts that littered the site – an elongated foot, a single breast, a folded arm, a pair of thighs, a face – had not been broken by the looters. In 1987, Professor Renfrew returned to the island to excavate a newly discovered and undisturbed deposit; here too, apart from a single intact figurine, all the rest were fragments. ‘As I studied the marble materials for publication, I realised that nearly all of the breakages seemed to be ancient and not the result of the looting. They had been deliberately broken before burial’, Professor Renfrew says.

The absence of the marble chips that would be expected if the figures were broken on the spot added to the mystery, ‘but the strangest finding of all was that hardly any of the fragments of the 500-odd figurines and 2,500 marble vessels joined together,’ says Professor Renfrew. ‘This was a very interesting discovery. The only conclusion we could come to was that these special materials were broken on other islands and single pieces of each figurine, bowl or pot were brought by generations of Cycladic islanders to Keros.’ As later radiocarbon dating confirmed, this activity also went on for a 500-year period, from 2800 BC to 2300 BC.

Returning to Keros with an international team of almost 30 experts for three seasons of excavations between 2005 and 2008, Professor Renfrew was able to examine a new undisturbed deposit and to see whether there were similar pits full of fragments on the tiny steep-sided islet of Dhaskalio that lay 80m off-shore from Keros.

What they found on Dhaskalio was a major Bronze Age settlement built on carefully prepared terraces encircling a large hall at the island’s highest point, contemporary with the Keros deposits, and abandoned around 2200 BC. Furthermore, the beautiful regular walling of the settlement was constructed not from the flaky local limestone but from imported marble, shipped to the island in large quantities over considerable distances. Another puzzling find was a stash of some 500 egg-shaped pebbles at the summit, and stone discs that were found everywhere across the settlement. Archaeobotanical evidence suggested that food was imported too, and that the site was intensively inhabited but only for part of the year.

What does it all mean?

As the team members conclude their analyses of the finds, all indications point towards Keros as having been a major ritual centre of the Cycladic civilisation. ‘We believe that the breaking of the statues and other goods was a ritual and that Keros was chosen as a sanctuary to preserve the effects,’ said Professor Renfrew.

He speculates that the objects were used repeatedly in rituals in the home islands, perhaps carried in ritual processions in much the same way that icons are paraded today in Greek villages: ‘They had a use-life, probably being painted and repainted from year to year. Perhaps the convention was that when a figure had reached the end of its use-life, it could not simply be thrown away or used conventionally, it needed to be desanctified in an elaborate process.’

‘Strangely,’ he added, ‘there seems to have been some obligation to bring a piece of the broken figure and deposit it on what must have been the sacred island of Keros, possibly staying a few days on Dhaskalio while the ceremony was completed.’

The missing pieces of the statues, bowls, and pottery have never been located on other islands. It is just possible that another aspect of the same ritual was to throw the remaining pieces into the sea during the journey to Dhaskalio and Keros. Fortunately, that was not the inevitable fate of all these eerily beautiful and highly stylised figurines – intact examples, with their folded arms, sloping feet, and featureless faces, have also been found intact in graves, and are known to have inspired the art and sculpture of both Pablo Picasso and Henry Moore.