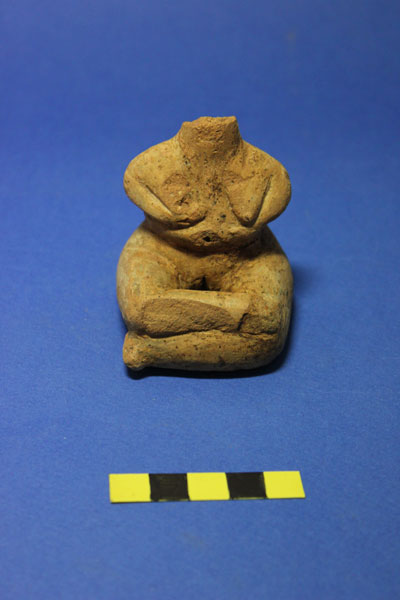 Archaeologists have uncovered more than 300 clay figurines depicting male and female forms, as well as human-bird hybrids, at Koutroulou Magoula, a Neolithic settlement in central Greece.

Ranging from 3-4cm to 10-12cm in length (about 1-4.5in), the models were scattered all over the 4ha site (nearly 10 acres), with some recovered from the foundations of houses, and others found around hearths and in post-holes.

‘The techniques of making the figurines vary, but a common method involves a clay core, around which the rest of the body is built,’ project co-director Professor Yannis Hamilakis of the University of Southampton told CWA. ‘The range of imagery is very varied, including male and female figures, some with no indication of gender, and also bird-human hybrids, some of which have a kind of four-legged base.’

He added: ‘We still have a lot of work to do studying them, but they should be able to give us an enormous amount of information about how Neolithic people interpreted the human body, their own gender, and social identity and experience.’

Archaeologists have been investigating the site since 2001, and for the last three years this has been under the Koutroulou Magoula Archaeology and Archaeological Ethnography Project, a joint undertaking by the University of Southampton, the Greek Archaeological Service, and the British School at Athens.

Lying about 260km (160 miles) north of Athens, the site was occupied between c.5800-5300 BC and comprises a 5.5m (18ft) tell with at least three terraces surrounded by concentric ditches. It was inhabited by a community of a few hundred farmers living in sophisticated houses that reused the same building footprint for successive generations.

‘This type of home would normally have stone foundations with mud-brick on top, but our investigations have found buildings preserved with stone walls up to a metre in height, suggesting that the walls may have been built entirely of stone – something not typical of the period,’ said Professor Hamilakis. ‘The tell is much larger than average, and the construction of its ditches must have been a major communal effort, though to date there are no signs of a centralised authority.’