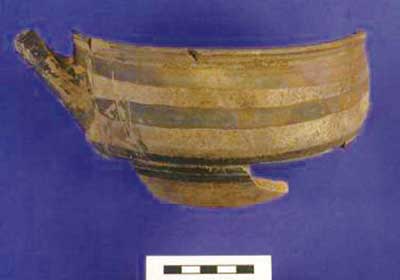 Archaeologists have opened a new chapter in Greek history by pushing back the dates of the Mycenaean period more than 50 years.
The hot new claim is based on studies of charred building timbers unearthed at the settlement mound of Assiros Toumba in Central Macedonia (Northern Greece). The research was done by Ken Wardle, of the University of Birmingham, Peter Kuniholm and Maryanne Newton, of Cornell University, USA and Bernd Kromer, of the Heidelberg Academy of Sciences, Germany. They have made their claims thanks to improved techniques of dendrochronology – matching the growth patterns of ancient timbers, and of carbon dating – the measurement of the quantity of an unstable isotope of carbon remaining in the wood after 3000 years. These methods indicate that the Mycenaean Palatial period, in which the Trojan War supposedly took place, probably ended before 1270 BC. This is the first accurate absolute dating, independent of Egyptian chronology – until now dates for this period have been based on archaeological evidence that starts with the Pharaohs in Egypt.
Assiros Toumba is formed by dozens of construction levels dating from the Middle Bronze Age (c 2000 BC) to the Iron Age (c 850 BC). Many of these were destroyed by fire and some of these charred oak construction timbers from the post-framed houses have been preserved for modern study. Assiros is in Northern Greece, which means it lies on the edge of the region where Mycenaean civilization flourished. Luckily, sufficient Mycenaean pottery was imported and locally imitated to enable precise correlation with events at Mycenae and other Southern Greek sites.
Intriguingly the revised dating matches the date proposed nearly 2,500 years ago by the Greek Historian, Herodotus, who set it ‘800 years before our time’ with nothing better to start from than the number of generations since the heroic expedition. Though the new research takes a more scientific approach, it reaches the same conclusion.
As for the question whether the Trojan War ever took place, archaeologists and scientists remain divided. The war is supposed to have been waged at the height of the Mycenaean era usually dated between 1400 and 1200 BC. However, as Birmingham’s Ken Wardle says: ‘This advanced technology could change the face of archaeology by allowing researchers to accurately date key events and periods in history. All that remains to obtain a precise date for the Trojan War itself is to find some of the timbers used to build the wooden horse!’