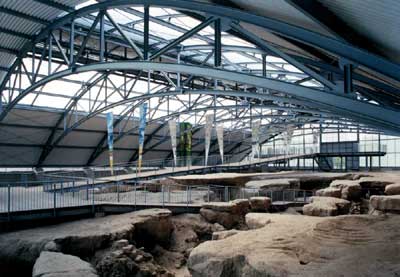 ‘An innovative education and tourist centre, the ‘Vulkanpark’ at the ‘Römerbergwerk Meurin, has won an international accolade – a European Union Prize for Cultural Heritage/Europa Nostra Award.
The Roman tuff stone quarry is set within an active industrial quarry in the Krufter Bach valley in the eastern Eifel, a landscape formed by quaternary volcanism. It was the Roman military who first began quarrying the tuff stone some 2000 years ago. In the first four centuries AD, the valley was the most important tuff stone mining area north of the Alps. At that time, it supplied the construction needs of almost every Roman town on the lower Rhine. Its second zenith came in the Middle Ages, at around 1200 AD, during a time of extensive church building. Today, industrial quarrying still goes on apace in the area, and the ancient quarry at ‘Römerbergwerk Meurin’ lies bang within the active industrial quarry.
Archaeological research began in 1998 with the excavation and preservation of the 2500 square metres of Roman quarry. The archaeologists found a myriad of ancient traces of the erstwhile quarrymen – including numerous marks made by the tools of the ancient quarrymen on the walls of the tunnels and galleries. This has allowed experts to exactly reconstruct the working process.
The aim of the ‘Vulkanpark’ is to illustrate the area’s 2000 years of continuous quarrying. The team have protected the traces of the ancient quarry for future research and turned the site into a compelling educational tourist-attraction. A modern vaulted structure, which caught the eye of the Heritage Awards Jury, was built to protect the digs. In addition, a system of walkways has been installed to aid visitor access and to provide close-up observation of the quarries. Finally, the Park hosts a wide range of activities, including historic re-enactments.
Web site: www.vulkanpark.com