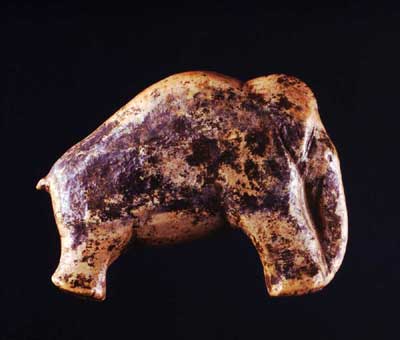 Five of the world’s oldest-known and most impressive Ice Age artefacts have been found in the Vogelherd Cave of the Swabian Jura, south western Germany. The tiny figurines, made from the ivory of woolly mammoths, are finely carved and dated to at least 30,000 BC. The prize piece is a complete figurine of a mammoth. It is a mere 3.7cm long and weighs 7.5 grams, yet it is exquisitely detailed. It has a pointed tail, powerful legs and dynamically curved trunk. Its head is decorated with six short incisions, while the soles of its feet are marked with a criss-cross pattern. It is the only complete Ice Age mammoth figurine known from the Swabian Jura. Indeed, it is rare to find complete ivory artefacts from the Ice Age since most figurines have become fractured along the concentric rings of the ivory.

Alas, the other figurines from the Vogelherd Cave are incomplete but include part of a second mammoth, a lion, and two as yet unidentified representations. The lion has a long torso, an outstretched neck, and is decorated with about 30 finely incised crosses along its spine. It too is small, measuring just 5.6cm long. Lions, mammoths and other powerful animals dominate the depictions of the earliest Ice Age art from the caves of the Swabian Jura. The Vogelherd Cave was originally excavated in 1931 by Gustav Riek, an archaeologist from Tübingen University. In 2005 a new generation of Tübingen researchers began reexcavating the site, and will continue each summer until 2009. It was in the cave’s sediments that they found the five figurines. The secure context and style of the discoveries indicate that the figurines belong to the Aurignacian culture. The latter is often associated with the arrival of modern humans in Europe. This has been supported by multiple radiocarbon dates from the cave that have yielded dates between 30,000 and 36,000 years ago. ‘The discovery of the five figurines has already exceeded all expectations for the project’, said Nicholas Conard, one of the archaeologists. The new finds show the splendid artistry of the Ice Age dwellers from this region.

The preliminary results from the excavation are currently on show until January 13th 2008 at a special exhibition at the Museum of Prehistory in Blaubeuren, Germany.