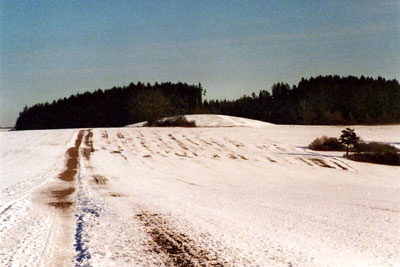 In his first-hand account of the Gallic Wars (Commentarii de Bello Gallico), Julius Caesar observes that the Gallic people have a moon- based calendar, and that the big event for them was what astronomers now call the Lunar Standstill, which occurs every 18.6 years. Lunar Standstills are marked in several ancient cultures (including sites in Colorado and Ohio), usually by standing stones that indicate the point where the moon seems to rise and set in the same place, instead of rising in one place and appearing to move across the sky to set in another. Now a German scholar, Dr Allard Mees, a researcher at the Römisch-Germanischen Zentralmuseum in Mainz, has discovered evidence to back Caesar’s observation: a huge royal tomb that functions as a lunar calendar and that preserves a map of the sky at Midsummer 618 BC, the presumed date of the burial.

The royal tomb at Magdalenenberg, near Villingen-Schwenningen, in Germany’s Black Forest, is not a new discovery in itself: it is the largest Hallstatt tumulus grave in central Europe, measuring over 320ft (100m) across and (originally) 26ft (8m) high, and its central grave was robbed in antiquity. More recent excavations have recovered the locations of numerous secondary burials placed around the edges of the mound and of various timber structures, including rows of wooden posts. Using NASA software, Dr Mees has discovered that there is nothing random about the secondary graves, which might be those of relatives or retainers, buried as they died during the years that followed their leader’s funeral. The order of the burials around the central royal tomb fits exactly the pattern of the constellations visible in the northern hemisphere at Midsummer in 618 BC, while the timber alignments mark the position not of the sunrise and sunset but of the moon, and notably the Lunar Standstill.

Dr Mees said that Magdalenenberg was ‘the earliest and most complete example of a Celtic calendar focused on the moon’, and that following Caesar’s conquest of Gaul, ‘Gallic culture was destroyed and these types of calendar were completely forgotten in Europe, to be replaced by the Roman sun-based calendar’.