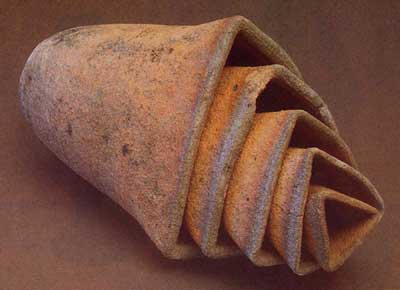 A 500-year old mystery surrounding the centre-piece of the alchemists’ lab kit, the crucible, has been solved.

Since the Middle Ages, mixing vessels or crucibles – manufactured in the Hesse region of Germany have been world renowned because of their ability to withstand strong reagents and high temperatures. Such was their appeal, Hessian crucibles have been found in archaeological sites across the world, including Scandinavia, Central Europe, Spain, Portugal, the UK, and even colonial America. For several centuries, many people tried to reproduce them but all failed.

Now, writing in Nature, researchers from University College London (UCL) and Cardiff University have unlocked the secret of the Hessian crucible. The researchers used petrographic, chemical and X-ray diffraction analysis on 50 Hessian and non-Hessian crucibles. Their analysis revealed that Hessian crucible makers had used an advanced material only properly identified and named in the 20th century: Dr Marcos Martinón-Torres, of the UCL Institute of Archaeology, who led the study, explains: ‘Our study revealed that the secret component in the Hessian crucibles is an aluminium silicate known as mullite (Al6Si2O13).’ Today mullite is used in a wide range of modern conventional and advanced ceramics, including building materials, electronic packaging devices, optical materials and catalytic converters, as well as in ceramic matrix composites such as thermal protection systems and liners for aircraft and stationary gas turbine engines. It is extremely resistant to thermal, chemical and mechanical stresses. This is what made the medieval crucibles so fit for their functions. It was thanks to the availability of Hessian crucibles that the discovery of some elements and their thermochemical behaviour could take place. The Hessian crucible makers synthesised mullite by manufacturing their crucibles with kaolinitic clay and then firing them at temperatures above 1100 degrees. Though they were not aware of mullite, they had mastered a very successful recipe, which they kept constant – and secret – for centuries.

Professor Ian Freestone, Cardiff School of History and Archaeology, said: ‘Manufacture of the crucibles used in early metallurgy and alchemy challenged the potters as they were required to withstand conditions more extreme than those required of other ceramics. In this case we find that the properties of a material which we regard as modern and high-tech, in this case mullite, were being exploited centuries ago by craftsmen who had a limited scientific understanding of their products but a great deal of skill and ingenuity.’

And that, quite possibly, is magic.