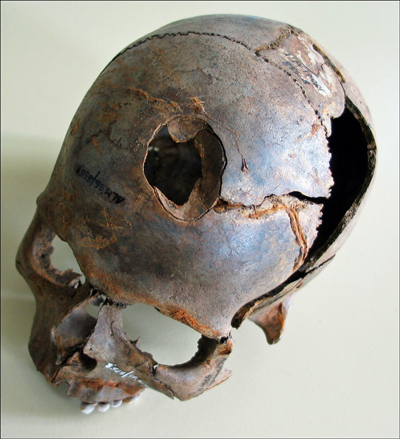 Weapons, horse bones, and human skeletal remains have been found in the bed of the River Tollense, in north-eastern Germany, suggesting that at least 100 people were involved in ferocious horse-mounted and hand-to-hand combat during the Early Bronze Age. Among the fractured and unhealed skulls and bones were found wooden weapons shaped like baseball bats and croquet mallets, as well as flint arrowheads. ‘We believe that a fight, a group conflict, or battle in c.1200 cal BC is the best explanation,’ said the authors of a paper reporting the find in the journal Antiquity (Vol 85, No 328).

The bones and weapons had washed down river from a site further up the swampy braided streams of the Tollense, where the main battle site has yet to be found. ‘It is possible that a considerable number of individuals are still preserved in the valley, and we might therefore expect many more victims,’ the authors write, adding that ‘the considerable number of individuals involved does not support the scenario of a small-scale conflict of local farmers or small war bands’, but a violent conflict on a much larger scale, perhaps carried out over several days or weeks.

The authors also say that the finds challenge the current picture of Bronze Age society, consisting of a warrior aristocracy armed with bronze weapons. Here, women and children were among the victims, and the fatal injuries were caused by weapons of flint and wood, with no evidence of any injuries caused by bronze adzes, daggers, or swords, although large numbers of bronze weapons were found at the site. The battle was fought in an area that was perhaps of some economic importance as a source of salt, or for control of the riverine transport system. About 5km to the north, some 35 burial mounds were documented during recent motorway construction, indicating intensive Early Bronze Age settlement.