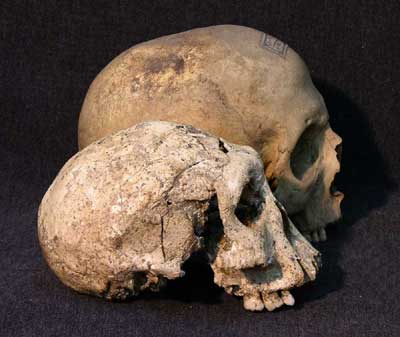 Newly discovered hominid skeletal evidence from a major archaeological site at Dmanisi in Georgia is providing important clues to the story of human evolution.

Since opening the site in 1991, Professor David Lordkipanidze and his team have gathered the most complete collection of a Homo species from any site older than 300,000 years old. Though much important information has been gleaned from the various skulls and jaws discovered at Dmanisi (CWA9), until this season the team had very little information about the rest of the skeleton. However, the newly uncovered remains consist of the partial skeleton of an adolescent individual associated with a skull, and the post-cranial remains (i.e. anything below the skull) of three adults. The remains date to between 1.7 and 1.8 million years ago.

These well-preserved elements are helping to paint a fuller picture of the Dmanisi people – a picture that defies current categorisation. For the bones reveal a mixture of advanced and primitive features. Thus, in many respects the Dmanisi hominids resemble Homo erectus, the upright hominid that first appeared in Africa some two million years ago and quickly spread throughout Europe and much of Asia. The Dmanisi hominids have remarkably human-like spines and lower limbs that would have been well suited for long distance travel, while their feet have well developed arches. The apparently small difference in the size of males and females also puts them in the same company as Homo erectus and Homo sapiens.

However, the Dmanisi skeletons have a number of ‘archaic’ traits found in pre-Homo erectus people. Thus their brains are relatively small, and their upper limbs are rather ‘primitive’ – more akin to the hands and arms of Homo habilis, or even to the very ancient Australopithecus that first appeared in Africa some four million years ago.

As David Lordkipanidze explained: ‘their body proportions are not completely human-like. Their legs are very human but their hands are still apelike. So, I would say these are quite mosaic features; this does not fit precisely the definition of Homo erectus. Maybe the Dmanisi finds are adding something new to the Homo erectus definition.’ Lordkipanidze, who has been internationally commended for his research, added ‘These are the earliest, indisputable hominids outside of Africa, so are of great importance to the story of human evolution.’