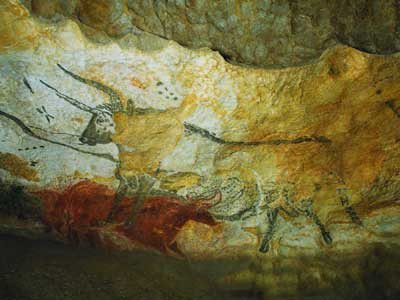 At the famous rock-art site of Lascaux in France, archaeologists face the challenge of working out the sequence in which the numerous overlapping figures and animals painted on the walls of the world-famous caves were laid down.

The hope is that the hundreds of depictions of bison, horses and deer that cover the walls and ceilings can be sorted into discrete groups of figures by analysing the chemical composition of pigments used in the cave paintings. By looking at the associations and the spatial relationships, they might then gain a better understanding of the phasing, iconography and meaning of the works.

It is early days yet, says Céline Chadefaux and her colleagues writing in Archaeometry 50, but her team has already isolated one group of figures, distinguished by the presence of tiny antler fragments in 18 out of the 63 paint samples studied. It is not known whether the crushed antler was deliberately added as a paint filler, whether it entered the paint accidentally from antler-carving activity elsewhere in the cave or whether it came from bone tools used in the quarrying, crushing and mixing of the pigments and the application of the paint.

Given that the antler fragments were also associated with pigments rich in haematite, the research team concludes they can be used as ‘a tracer of a specific ornamentation phase of the cave’ that took place about 17,000 years ago. That single short period of painting activity includes three of the most striking animal portrayals at Lascaux: the red cow on the right wall of the Hall of the Bulls, a brown horse on the left wall of the same room, and a red-and-black horse in the axial chamber. The search is now on for further elements that can be used to isolate different episodes in the creation of Lascaux’s rich panoply of Palaeolithic art. •