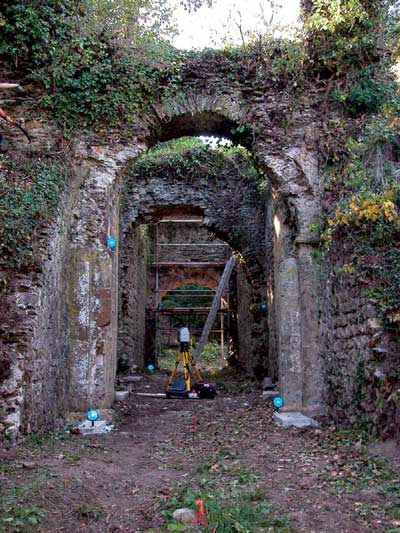 Ramesses II’s scanners in France
CWA readers may remember the moving story of Ramesses II published in CWA 9. We reported on plans to transport the mighty statue, currently towering over a busy roundabout in downtown Cairo to a far more suitable location on the Giza Plateau. But in order to plan for this logistically complicated move, the statue needed to be scanned and closely recorded.

Plowman Craven Associates (PCA), in conjunction with the Museum of London Archaeology Service (MoLAS), has just undertaken another major 3D recording survey. But this time, the project concerned an 11th century AD gatehouse in France. The gatehouse is at Château Ganne, Pommeraye, in the heart of ‘La Suisse Normande’, 35km to the south of Caen, France. The fortification, atypical in Normandy, has parallels in Exeter Castle and the hall of Chepstow Castle.

In order to record it the team used a combination of laser scanning and photogrammetry (spatial coordinate from photographs and survey control) to record accurately and efficiently the extant masonry remains. ‘The non-contact nature of laser scanning and photogrammetric recording techniques was an important driving factor behind this work because of the structurally dangerous state of much of the remains. These methods allow the authorities to identify and isolate the areas of the gatehouse that need swift remedial action’, said PCA’s Digital Heritage Consultant, Duncan Lees.

The earthwork remains were bought from private ownership by the local authority – The Service Départemental d’Archéologie du Calvados – as a last-ditch attempt to save it from destruction through neglect. Plans are now afoot for its excavation, restoration and ultimate conversion into a tourist attraction.