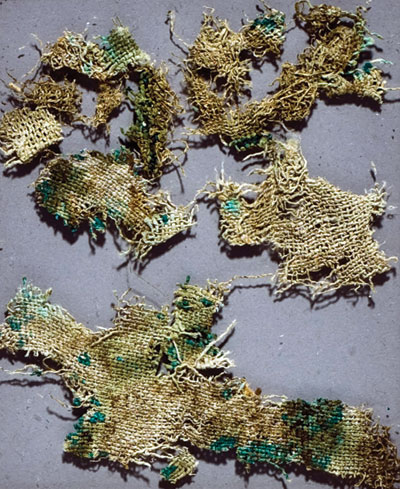 A piece of cloth woven from nettle fibres and found in a Danish Bronze Age burial mound is evidence of far-reaching trade connections 2,800 years ago, archaeologists say.

Excavated on Funen, off the coast of Denmark, the cloth had been used to wrap the cremated remains of a man, which were then placed in a bronze vessel.

It had been assumed that the cloth was made in Denmark from local plants, but new analysis published in Scientific Reports suggests that it may have come from as far afield as Austria, perhaps used to repatriate a trader who had died on a trip abroad.

‘Not many people know that the nettle is an excellent textile plant,’ National Museum of Denmark archaeologist Ulla Mannering told CWA. ‘The sting is a feature of the living plant only, and is not transferred to the fibres used for cloth. In fact the fibres are exceptionally soft and shiny – top-quality nettle fabric is as good as raw silk.’

Karin Margarita Frei, a geologist and archaeologist from the Danish National Research Foundation’s Centre for Textile Research at the University of Copenhagen, analysed strontium isotope values in the ancient plant fibres to find out where the nettles had grown. Strontium is an element in the earth’s crust which is absorbed into humans, plants, and animals through water and food. Regional geological variation makes strontium isotope useful in determining the origins of archaeological remains.

Dr Frei’s analyses indicated that the nettles came from Sweden, Norway, or Central Europe, while examining artefacts from the burial mound helped to narrow this down further. The bronze urn containing the man’s remains is Central European in style, most likely from the Kärnten-Steiermark region of Austria.

‘Bronze Age Danes got their bronze from Central Europe, and imports were controlled by rich and powerful men,’ said Ulla Mannering. ‘We can imagine how a bronze importer from Funen died on a business trip to Austria. His bones were wrapped in an Austrian nettle cloth and placed in a stately urn, which his travel companions transported back to Denmark.’