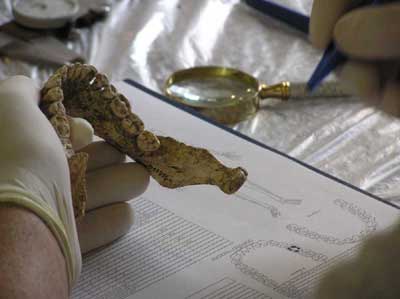 A team of archaeologists from the University of Sheffield is offering new insights into the cultural and biological lives of early farmers who lived in the Czech Republic around 7,500 years ago.

The researchers conducted biochemical and DNA tests on the bones of a sample of 85 early Neolithic farmers found at the Linear Pottery culture cemetery in Vedrovice, Czech Republic. Their findings suggest that these early farmers were indigenous to Central Europe and not migrants from Anatolia and Levant in the Near East, as was previously thought.

The project, which began last year, involves researchers from universities in the UK, Germany and the Czech Republic. The study was designed to investigate both the cultural and biological lives of these people who introduced animal husbandry and agriculture to Western Europe. Through analysis of human bone fragments, the scientists have been able to determine where these people were born, what injuries and illnesses they suffered from, and where and how they died.

The Linear Pottery Ware culture was the major early Neolithic culture in continental Europe, stretching from northern France and Belgium across Germany all the way to southern Poland, Slovakia and Hungary. This type of pottery has been seen as a signature of immigrant farming groups who came up from the south-east and colonized all these regions of Europe, pushing the local hunter-gatherers aside in the process. However, the new research indicates that it was the local hunter-gatherer communities, whose ancestry can be traced back to the local late Palaeolithic, who adopted farming for themselves – through contacts, trade, and partner exchange (e.g. marriage), with the first farmers of south-east Europe.

“If we can conclusively prove this to be the case,’ said Zvelebil, ‘it will be a major discovery in our understanding of how farming spread across Europe in the early Neolithic period. It will also advance the knowledge of our own ancestral roots.”