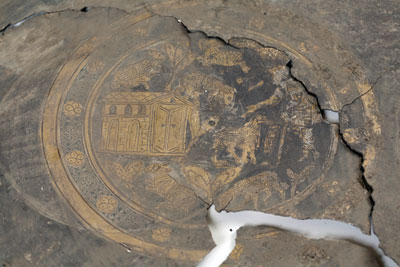 Archaeologists recovered a hoard of nearly 50 Roman silver luxury utensils at Vinkovci in Croatia, describing it as one of the most important discoveries in the country.

Unusually, the whole hoard was excavated by professional archaeologists who, therefore, were able to record its entire archaeological context. The find, made during investigations ahead of construction work, was then escorted by armed guard to the City Museum in Zagreb for conservation and further analysis.

The 48 items include plates, bowls, cups, jugs, and spoons, and date to the late 4th century AD. Many are decorated with gold plating and engravings of animals, plants, people, and buildings. One plate bears the inscription AQVILA ANTONINVS FECIT (‘made by Antoninus Aquila’).

City Museum archaeologist Hrvoje Vulic told CWA that the hoard was found in a pit paved with Roman brick. As Vinkovci city centre is a protected heritage zone, all development must be preceded by archaeological survey, either by the City Museum or a private company – in this case, Geoarheo. ‘This is one of the most important finds in Croatian archaeology, crowning 40 years of systematic rescue excavations in Vinkovci by the Museum and private companies,’ he said. ‘It is truly amazing.’ Excavations since the 1970s have revealed evidence of 8,000 years of continuous occupation in the Vinkovci area, from the Neolithic period to the present day.

In the 1st century AD, Roman settlers founded Cibalae, which by the late 3rd or 4th centuries was the third largest town in the province of Pannonia. Boasting almost 10,000 inhabitants, its status was secured when it became the birthplace of two emperors, Valentian (r.364-375) and Valens (r.364-378).

Referring to the find, Vulic said: ‘These vessels would have belonged to a rich inhabitant of Cibalae and were probably buried due to the unsafe conditions that shook the Roman Empire at this time.’