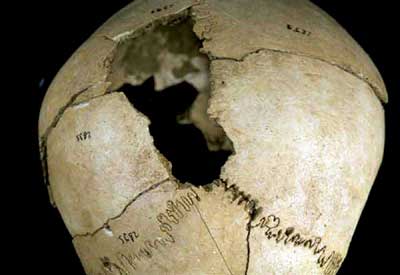 Strontium (Sr) is a chemical element that builds up in the bones and tooth enamel as food is digested. Through its precise determination, researchers are now able to distinguish between friend and foe on ancient battlefields.
This is possible because in nature, Sr occurs in a variety of forms (isotopes) that differ according to the number of particles in the atomic nucleus. The 87Sr und 86Sr isotopes are the ones that are important for the classification of bone material, and the ratio between the two varies and changes over time in accordance with geological conditions. As the strontium in the bones is constantly exchanged with the Sr ingested with food, the isotope ratio in bone material reflects that in the surrounding area. Because of this the Sr isotope ratio provides clues about a person’s origins.
However measuring the ratio accurately is a challenging task. A team under Professor Thomas Prohaska of the Institute of Chemistry at the University of Natural Resources and Applied Life Sciences in Vienna has now succeeded in achieving hitherto unknown levels of accuracy with this form of analysis. The interdisciplinary project, supported by the Austrian Science Fund (FWF), has opened the way for fascinating reconstructions of prehistoric events.
The scientific usefulness of the method was demonstrated at an excavation in cooperation with a team under Prof. Maria Teschler-Nicola of the Vienna Museum of Natural History. Over 100 human skeletons, dating to 7,000 years ago, had been found very close together at the site of a Neolithic village in Asparn, Lower Austria.
However, to work out whether fighting had occurred at the village, the archaeologists could not use traditional methods, which depend on comparisons of morphological characteristics, and require that the skeletons be in an excellent state of preservation. It was only when the results of anthropological research were complemented by determination of the Sr isotope ratio that it was possible to unambiguously identify a group of skeletons as those of villagers who had been defeated by intruders.
The applications of this technique are myriad. Another FWF funded project aims to work out the migratory behaviour of individuals by comparing the Sr Isotope ratio in the bones to that in the molars (a technique used to identify the origin of Oetzi the Iceman, as reported in CWA 2). For, in contrast to the bones, Sr is no longer exchanged in tooth enamel after the age of four, allowing researchers to tell where the person lived as a child. Different isotope ratios in the bones and teeth are therefore proof of migration after the age of four.
This research project is an impressive example of the ways in which analytical chemistry, archaeology and anthropology can join forces to produce new insights.