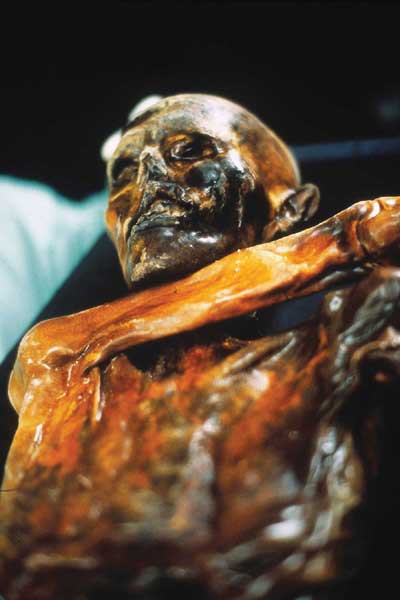 Oetzi the Copper Age Iceman has been a constant source of fascination, if not revenue, since his discovery 11 years ago. Now, the latest study of his corpse indicates that he was a fan of red meat and a high-ranking hunter.
Previously, it had been assumed that Oetzi, who lived around 5,300 years ago, was a grazer of wild plants who was killed as a result of an accident. However analysis of his intestinal content by Franco Rollo and colleagues at the University of Camerino, Italy, suggests otherwise.
They have discovered that though Oetzi was hiking on an empty stomach when he died at 3,200 metres above sea level, his intestines still contain evidence of his last two meals. It seems that the day before he died, Oetzi feasted on ibex, a wild goat, as well as grains and some kind of vegetable. These he ate as he was passing through a forest of evergreens on his way to the mountain pass that was to be his grave. This last Sherlock Holmsian snippet about his route comes thanks to conifer spores found in his stomach. Since the conifer in question survives at no higher than 2,500 metres in altitude, it helps support the theory that Oetzi was a hunter: Copper Age hunting camps from the region are commonly been found at about 2,000 metres.
As for his last supper, Oetzi appears to have dined on venison and some grains after having reached a rocky valley. Current consensus holds that Copper Age people from this area rarely ate meat, and that if they did, it tended to be small game such as rabbit and squirrel. Oetzi’s lavish meal, the scientists believe, lends credence to the notion that he was skilled at hunting large game, and might even belong to a noble class.
Previous research on Oetzi’s digestive system by Austrian botanist Klaus Oeggl from the University of Innsbruck, identified only wheat and greens when examining the tissue with a microscope. The Italians, instead, extracted DNA from the contents of the intestines to arrive at their findings. They also found more evidence of greens than grains, which agrees with the assumption that hunters preferred to eat what they found along the path, rather than carry potentially weighty sacks of bread.
The way he perished provides a final push in favour of the ‘hunter theory’. At first, an innocent theory for his death was offered: Oetzi was a humble shepherd, bringing his flock back south, when he slipped and died. But last year, as reported in CWA 2, this hypothesis was abandoned: an X-ray turned up a 21-millimetre arrowhead lodged behind Oetzi’s left shoulder that seemed to have come from an archer standing below the Iceman. But why? Rollo’s team now believes he was murdered out of a rivalry with other hunters. One of the key reasons for this is that Mesolithic deer and wild boar hunters typically aimed their arrows at the left shoulder blade, since this offered the best chance of killing the prey at the first shot. The fact that the arrow that pierced Oetzi also entered his left shoulder blade makes it feasible that he was the victim of another big game hunter.
Oetzi, arthritic and infested with whipworm when he died, remains the most carefully preserved European human on record from the late Stone Age. He is on show at the South Tyrol Archeological Museum in the Italian city of Bolzano, where he is kept in an iron chamber at minus 6 degrees Celsius and nearly 100 percent humidity, similar to the conditions in which he was found.
The Smithsonian National Museum of Natural History in Washington, D.C. is currently preparing an exhibit on him.