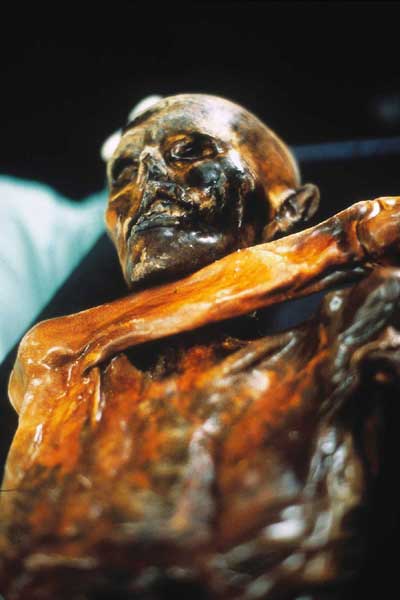 Was Oetzi the Iceman originally Austrian or Italian? When the frozen body of Neolithic date was originally found in 1991 high in the Alps, he was brought down to Austria, to the University of Innsbruck where he soon became a major tourist attraction, bringing in 2.5m Euros a year. But was he really found in Austria? A joint Italo-Austrian commission was set up to arbitrate and concluded that the body was found in Italy, 100 yards south of the border. Thus in 1998 his body was translated to Italy to a special museum in Bolzano. The Italians promptly set to work to conduct their own explorations. What has been found? Two question in particular have reached stunning new conclusions.

The first question was: how did he die? It became apparent that his death was not as innocent as once assumed. Initially, archaeologists had seen Oetzi as a skilled craftsman, tragically struck down by hypothermia as he pushed across the Alpine valleys. This was somewhat revised in the mid 1990s when X-rays and CAT (Computer Assisted Tomography) scans revealed what appeared to be unhealed rib fractures. This resulted in a new theory that the Iceman was a shepherd who had become involved in an argument or battle, and had fled to the mountains. However, few had expected Oetzi’s death to be as violent as the evidence now suggests.
In June 2001, his body was X-rayed again, this time in Italy, when one of the researchers spotted a flint arrowhead embedded 3cm into his shoulder: did he bleed to death? Analysis of blood traces found on his clothes and weapons by a team led by Thomas Loy, of the Queensland University, revealed four different DNA patterns – none of them Oetzi’s. The blood of two people was on an arrowhead found nearby, the blood of a third person was on Oetzi’s flint knife blade, while more blood of a fourth individual was found on his waterproof cloak of woven grass.
Although it is unclear whether he was fighting with all of these people just before his death, it is clear that he died after fighting. There is a deep wound on his right hand and wrist, and according to forensic scientists who examined the mummy, this wound was inflicted in the last few hours of his life. Furthermore, the nature of the wound is typical of one sustained in defence against an attacker. Bruises on his body further indicate fairly fierce hand-to-hand combat. Oetzi’s hand was frozen into a tight grip – nearby on the ice, lay his knife, so it is possible that he died hiding, holding his knife ready to defend. The notion that he was hiding rests on the fact that he seems to have propped up the rest of his kit against a nearby rock.

The second question concerned his origins: was he was a pre-Austrian, on his way to what is now Italy? Or was he was pre-Italian and on his way to modern-day Austria? Further research, reported in the journal Science (31st October 2003) studied elements in Oetzi’s teeth, bones and intestines and compared them with those found in water and soil in various regions.
Analysis of his tooth enamel shows that between the ages of 3 and 5 he was drinking water with isotope ratios found only to the south. Analysis of the isotope level in his bones shows that he drank both from northern and southern water sources during his adult life. Scientists also analyzed the argon ratio of bits of mica found in the intestine, which probably entered his body in the stone-ground grain, or bread, that he ate. This evidence suggested that Oetzi never went much south of Bolzano, and probably restricted his movements to a few valleys within 60 kilometres south east of where his body was discovered. Finally, a well-preserved sample taken from Oetzi’s transverse colon was examined. It contained a number of pollen varieties that the Iceman either breathed in, or that landed on his food. Most of the pollen came from the hop-hornbeam tree, which grows in warmer environments, indicating that Oetzi had travelled from the south, probably from or through the Schnals Valley – the nearest place where such trees would have grown – some six to eight hours by foot, south of the Oetzal Valley.
This all indicated that the Iceman probably spent his childhood in the southern Alpine valleys. – perhaps Feldthurns in the Eisacak valley of the southern Tyrol where excavations have revealed a standing stone dating back to the Copper Age. He seems to have then migrated further north in adulthood. Alternatively, he might have spent his summers up in the mountains and moved down to the valleys in the winter – a pattern of seasonal migration that is still practiced today. The intestinal sample showed that just before his death, he was travelling from the southern Alpine region.
An interesting conclusion can be drawn from all this. The result of translating Oetzi to a new museum in a new country has led to an upsurge of new research, with new observations being made that had eluded the earlier meticulous researchers. Is it not therefore a rather good idea that objects should be shifted around between museums on a regular basis? This would not only encourage new research and new ways of looking at objects, but would also breath new life into dead objects. It might even encourage more visitors.