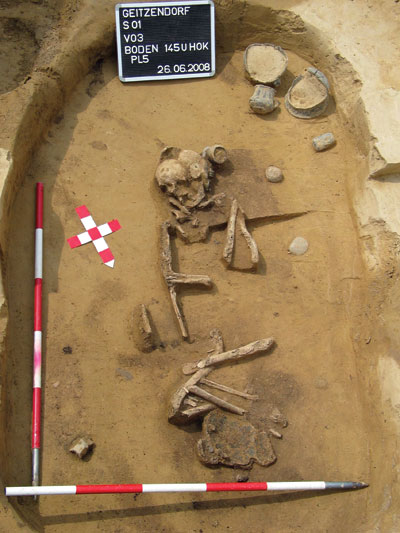 Austrian archaeologists are reconsidering prehistoric gender roles after the discovery of what could be the earliest female metalworker.

The burial of a mature woman, aged between 45 and 60, was uncovered along with 14 other early Bronze Age graves during excavations by the Austrian Museum of Ancient History at Geitzendorf, north-west of Vienna.

She had been laid to rest with four stone tools, including anvil and hammer stones. When found in male burials, Lower Austrian state archaeologist Dr Ernst Lauermann said, these artefacts are interpreted as metalworking tools, probably used for making jewellery.

‘It was normal then for a person to be buried with items that were part of their daily working lives,’ he said.

Lying in a crouched position, the woman’s pelvis was missing, but archaeologists identified her as female by features of her skull and lower jaw. On either side of her head were small pieces of jewellery, including studs and rings – perhaps made by the woman herself.