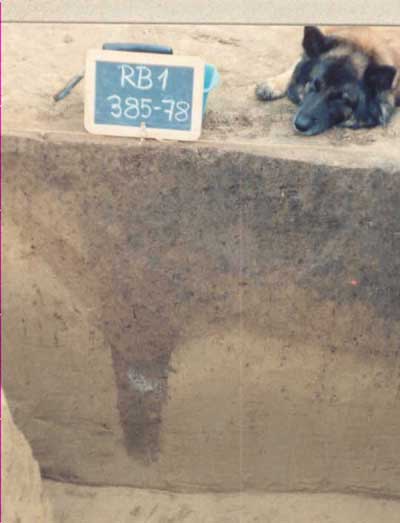 Packed living conditions and litter strewn across the site? Or organised houses with neat hearths?

What was life like for the first farmers in Austria? In fact, relatively little is known. Consequently, a unique project has been established to bring together a host of experts to reconstruct the lives of some of Austria’s first farmers The project, entitled Early farming life 7000 years ago: a reconstruction, is based on the thorough investigation of two early agricultural settlements.

The first-known farms in Central Europe date from the middle of the 6th millennium BC. By this time, a combination of arable agriculture and animal husbandry was already in operation. The project, headed by Eva Lenneis at the University of Vienna, is based on the sites of Mold and Rosenburg in Lower Austria around 100 km northwest of Vienna.

The two ancient sites are located only a few kilometres apart, but are rather different in character: The 4ha settlement at Mold has produced archaeology of particularly encouraging quality. To date 13 dwellings have been identified, and finds awaiting examination include some 60 kilos of well-preserved animal bones, copious botanical data, ceramics, stone artefacts, and other small finds. By contrast, Rosenburg presents something of a mystery. The site was fully excavated between 1988 and 1994. It is a much smaller site with a number of unusual aspects. For example, the team is keen to shed light on the purpose of a large number of unusual ‘slit-pits’. The latter are around 2-3m long around 20-40cm wide and about 40-120cm deep (though they have been heavily eroded so the original depth remains unclear). Likewise, the group is also trying to determine the reason for the seemingly ‘odd’ location of the site in the middle of a wooded area. Detailed examination of the sites and their artefacts should help to clear up a number of issues. As Lenneis explains: ‘our aim is not just to find out the significance of crop cultivation as opposed to collecting wild plants, or to find out which domesticated animals were being kept. Rather, we also want to know more about the overarching economic structures, and of the relations or hierarchies that might have existed between and within the settlements.’ When pieced together, the results will provide a far more detailed overall picture of early farming life in Austria. As part of its multidisciplinary approach, the project is enlisting the Vienna-based VERA laboratory to provide carbon-14 dates for the sites. They are joined by botanists from the Bodenkultur University in Vienna, zoologists from the Natural history museum in Vienna, a lithic specialist from the University of Brno in Moravia, and specialists based at the Central Institute of Meteorology and Geodynamics.

The resultant information is being transformed into digitised plans, surveys, and into computerized based statistical data. Thus, the pottery is currently being entered into an image database; information about the bones, plant remains and lithic tools is being recorded and plans of the buildings are being digitised to enable a next stage of computer-generated analysis. Moreover, initial investigations of the flint indicates that at least some comes from the Bakony mine north of the Balaton in Hungary, as well as from closer sources near Brno in Moravia. ‘The results of these investigations will provide us with some interesting information on trade and culture contacts in the Neolithic of Central Europe’ said Lenneis.

The entire investigation will be completed in summer 2008 and, it is hoped, will be invaluable to researchers.