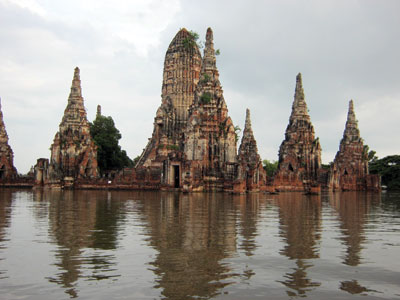 Ayutthaya lies on the bank of the Chao Phraya River, a mighty waterway fed by innumerable tributaries that rise in the Phetchabun Range to the east, and the uplands on northern and western Thailand. From the onset of the monsoon in April and May until the rains subside in November, the river turns into a torrent, and widespread flooding is endemic. This year, the worst monsoon rains ever recorded have breached the flood banks. Water now covers much of the ancient city, threatening the foundations of the great temples; there is a real threat of collapse. The main focus is on Wat Chaiwatthanaram, founded in 1630 by King Prasat Thong as a memorial to his mother, and one of the jewels in the crown of Ayutthaya.

Now a World Heritage Site, Ayutthaya was the capital of Thailand from 1350 until a Burmese host sacked it in 1767. In its heyday, it was compared favourably with Paris, and its kings welcomed foreign ambassadors and merchants, playing their part in international diplomacy. A treaty was signed in 1687 between King Narai and Louis XIV, whose embassy included Simon de la Loubère, the cultivated French diplomat. He wrote a detailed account of his impressions of Ayutthaya, making the first known archaeological observation in the Kingdom: They do likewise daily discover pits anciently dug, and the remains of a great many furnaces.

After the destruction of Ayutthaya by the Burmese, the temple fell into ruin, and only in 1992 was it returned to its former state. Now it is not warfare but water that threatens it and surrounding temples. My former student Dr Somsuda Leyavanija, now the Director General of the Fine Arts Department, is deploying all the forces at her disposal to mitigate the damage and to ensure the survival of this renowned capital. I am sure that the good wishes of all readers of Current World Archaeology will echo the hope that she will be successful.