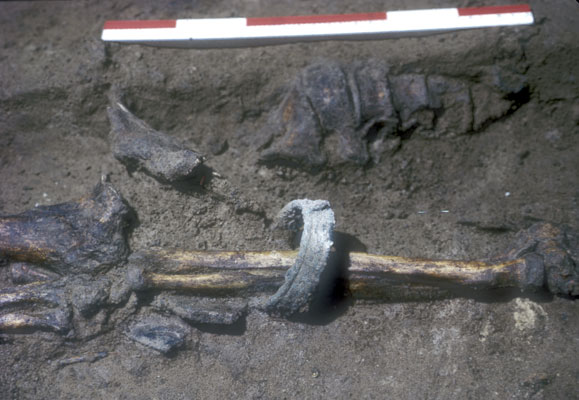 Very early in my archaeological career, I encountered an intense debate on the chronology of the earliest Neolithic in the Near East. It was rather like the race to the Pole: who had the earliest date? The English champion was the redoubtable Dame Cathleen Kenyon, her American adversary was Robert Braidwood. It was a case of Jericho v. Jarmo. I never imagined that I would one day find myself involved in a similar situation. Yet this is how our subject advances, by constant probing, questioning, and refining.

In my case, the debate concerns the dating and origin of the Bronze Age in South-east Asia. Over the past 30 years, I have excavated five or six Bronze Age sites. When I began, research on the topic was in its sensational infancy, generated when Wilhelm Solheim announced he had uncovered at Non Nok Tha in North-east Thailand the earliest evidence in the world for copper-base metallurgy. At once, the archaeological community was divided between those prepared to accept his claim, and the sceptics.

For me, it began in 1974, at Ban Chiang in North-east Thailand. The site had achieved great prominence in Thailand because of the discovery there of very beautiful Iron Age painted pottery vessels. They were reproduced on Thai postage stamps, and the King himself had visited the excavations. These pots had also stimulated a frenzy of looting fed by American servicemen from the nearby air-force base: busloads would visit the site, and most returned with a souvenir pot. So the University of Pennsylvania and the Thai Fine Arts Department appointed Chester Gorman and Pisit Charoenwongsa to direct new excavations. I was invited to study the faunal remains.

We found two undisturbed parts of the site, one in a backyard and the other under a narrow lane. Over two seasons, we worked our way down through Iron Age, Bronze Age, and Neolithic layers that included human graves. During our excavations, several leading specialists in early metallurgy visited to find out for themselves the nature of the site and context of the early bronzes. Towards the end of the second season, the grave of a young man was found in burial 76, a deep and early context. He was interred with a socketed bronze spear.

Dating this sequence has involved three stages. In the first, we collected charcoal fragments from graves for radiocarbon dating. In 1976, based on two of the resulting radiocarbon determinations, Chester and Pisit reported in the journal Expedition that the early Bronze Age dated from 3600 BC and the Iron Age from at least 1600 BC. This carried with it a remarkable corollary: there must have been an independent discovery of alloying copper and tin earlier than in the Middle East or China, followed by iron forging by the same date as the Hittites or even earlier.

In 1981, I excavated a nearby site of Ban Na Di. Here, we found more Bronze and Iron Age burials in contexts dated by charcoal in the furnaces used to bring copper to melting point before casting. Our dates were much later than the equivalent layers at Ban Chiang. This so pleased the sceptics, unconvinced by the claims for Ban Chiang, that I was asked in 1983 to give the Mortimer Wheeler lecture on this issue at the British Academy.

By then, most tragically, Chester Gorman had died. As his health deteriorated, he asked me to assume responsibility for publishing our excavations at Ban Chiang. This, however, was vetoed by the authorities in the University of Pennsylvania, who instead appointed Joyce White, then a graduate student, to take charge.

Joyce worked on a second-generation dating initiative involving the organic fraction found in the clay used to make pots to accompany the dead. She experimented with two pre-treatments. In one, she teased out the actual rice-chaff temper for dating; in the second, she crushed the entire potsherd and, after various chemical washes, she dated the residue. The latter always furnishes an earlier date than the former when dating the same pot, and she has proposed a new chronology for this site based on seven determinations from this early set.

In 2009, she and Elizabeth Hamilton published a long article founded on a date of 2000-1800 BC for the early Bronze Age at Ban Chiang. In the same year, my son Tom and I published the chronology of my excavations at the site of Ban Non Wat, just 280km south-west of Ban Chiang. As at Ban Chiang, we had identified a cultural sequence spanning the Neolithic to Bronze Age transition. We had at our disposal 76 radiocarbon dates, most from the shells placed as ritual offerings with the dead. Our Bayesian analysis of the results pinpointed the transition into the Bronze Age at 1050-1000 cal. BC.

Is it possible that two sites so close to each other could have adopted bronze technology a millennium apart? The implications of a date of 2000-1800 BC are profound because, at that juncture, there was no obvious source for the knowledge of smelting and casting copper in China. So White and Hamilton proposed that the origin of the Ban Chiang bronze-casting tradition lies in the Seima-Turbino founders of the Altai, over 2,500km to the north-west.

Such an origin would have required a remarkably long march to Ban Chiang that left no known trace of metallurgy in China, followed by a standstill of about 40 generations before the knowledge of copper smelting travelled further south to Ban Non Wat. A date of 1000 BC, however, makes a Chinese stimulus highly likely, since by then the great bronze civilisations of China were flourishing and trading jades and bronzes to the south.

Just as our paper on the chronology of Ban Non Wat appeared in Antiquity, Tom spent Christmas with us in New Zealand. I thank my good fortune that one of my sons is a radiocarbon-dating specialist and Professor of Archaeological Science at Oxford. I pointed out to Tom this impossible equation, and resulting dilemma. ‘Well Dad,’ he responded, ‘have you any animal bones from Ban Chiang?’

Deep in our Otago basement, I have boxes of fauna I had collected over 35 years previously, and I extracted some pig bones that had been placed with Bronze Age dead of Ban Chiang. Tom took them to Oxford with him and, after a tense wait, reported back that they fell into 1st millennium BC – much later than the White Hamilton chronology. But Tom had also done his homework by finding a doctoral dissertation on the internet from the University of Hawaii, which had analysed the Ban Chiang human bones. Most had enough collagen for radiocarbon dating.

I asked Richard Hodges, now director of the University Museum – and familiar to CWA readers for his regular ‘Postcards’ – and Somsuda Leyavanija, Director General of the Thai Fine Arts Department, for permission to sample them. Before long, the precious bone fragments were in Oxford. Now came a further anxious wait.
Tom first pre-treated the bone sample from burial 76, the man with the bronze spear. The result: 1128-936 cal. BC. This is identical with the first bronze at Ban Non Wat. What a relief! Then came the full set of results. All confirmed the transition in the late 11th century BC.

There is a lesson to learned. With the benefit of hindsight, unspeciated charcoal can only provide a date before an event took place, because there is no way of knowing how old the tree was which supplied the charcoal. Crushed potsherds may well come from a pot made from clay containing an unknown fraction of old carbon. So again, it cannot be relied upon. In this context, can there be a better source of dates than the bones of the very people who lived at Ban Chiang?

As I have said, progress in prehistory is made through on-going research and debate. Tom and I are keen to know how Joyce White and Elizabeth Hamilton respond to our results, so I will reserve space in my next column for them to give us their views on our new chronology for Ban Chiang and its cultural implications.