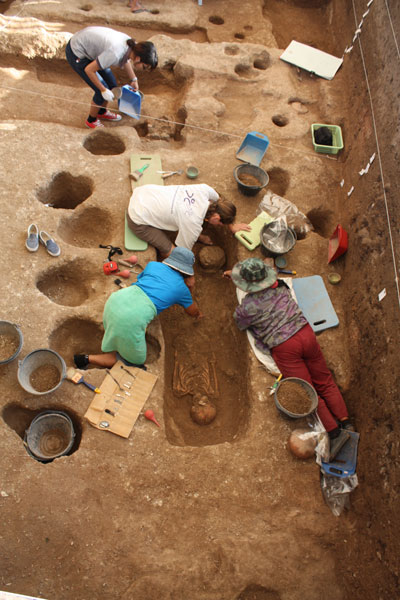 At a barbecue last year, a former student of mine, who had joined me on my excavations for 20 years, suggested the time had come for me to give up fieldwork and leave it to younger people. I reflected on this by comparing my interests and plans with those of my contemporaries who studied archaeology atCambridgeand completed their PhDs in the same year as I: 1966. I tried to imagine Sir Barry Cunliffe distancing himself from the Celtic Iron Age, or his excavations at the Brading Roman Villa, to reach for his slippers. Or Sir Paul Mellars setting aside the Neanderthals and looking out at a world of Anatomically Modern Humans through the haze of cigar smoke and a glass of port. And how about Lord Renfrew of Kaimsthorn, feet up in an armchair, showing no further interest in Cycladic figurines? Such thoughts buoyed me as I prepared once again, like an old knight myself, to enterthe lists, raise my lance, and charge down on my quarry.

This opportunity arose when a much more generously spirited former student, Dougald O’Reilly, asked if I would join his proposal to the Australian Research

Council to fund new excavations on key prehistoric sites inCambodiaandThailandthat illuminate the origins of the civilisation ofAngkor. I had been piecing together this complex jigsaw puzzle myself for 20 years. At Ban Non Wat (see CWA 31), I had encountered the sort of archaeological nirvana one only dreams of: a huge moated settlement with 12 phases, beginning with hunter-gatherers, proceeding through two Neolithic, six Bronze and three Iron Ages, to culminate in the transition to early states. We recovered about 650 human burials, tens of thousands of artefacts, and 76 radiocarbon determinations. Last year, I completed the fifth volume of our report series, and was ready for a new challenge. So I agreed. But where to excavate? I dusted down my notes, and one site in particular stood out: Non Ban Jak, next to thevillageofBan Nong Khrua Chut. Air views reveal a large, oval settlement mound ringed by two broad moats and banks.

New beginnings
Where do you start with a site measuring 400m by 200m? Well, you try to dig in the middle, which will usually have the longest sequence. On 2 November 2011, we opened a square 8m by 8m in extent. As I write this on our day of rest from the excavations, I can already reflect on my good fortune. Quite apart from the good company, the delightful scenery, the rich bird-life on the mound, and the outstanding skills of my Thai village friends working with me, we have encountered something that is quite new to me – and to Southeast Asian prehistory. In almost all my excavations, I have found myself in the midst of cemeteries. But at Ban Non Jak, we have come across something very different.

Ten days into the dig, I noticed a straight white line appearing across the floor of the trench. Each afternoon, I have the whole square cleaned and mount a ladder to take an image from all four sides. Poring over these, I noticed a second faint white line running parallel with the first, and then turning a right angle. By degrees, there emerged more lines. They turned more corners, began to form squares, and, within them, there were white clay floors. I am often asked: ‘You have all these burials, but where did the people live?’ Now, here, we have found what looks like a residential area of an Iron Age town that was occupied nearly 2,000 years ago. A memory flooded back: it was 1958, I was digging at Verulamium in rooms where the Romano-British family had relaid their floor several times. How appropriate that Sheppard Frere, my then Professor, had in his nineties given me his precious trowel, inscribed ‘F’ on the handle, with which I was now revealing more such floors. My mind then drifted back to 1960, when James Mellaart stunned us all with his lectures on the houses at Çatalhöyük, with their altar benches and wall paintings. This sort of archaeology in Thailand is new to me. We are tracing the walls, and trying to understand the construction technique and what they might have looked like. They are very substantial, some almost a metre wide at the base, and made of white clay dug deeply from the substrate – perhaps when the broad moats were dug and the spoil turned into ramparts. Building I has lip-to-lip pots, placed exactly 3.6m apart, at three of the four corners – we hope to find the fourth soon. The foundations incorporate postholes, presumably to support the wall above. This room has thick internal clay benches. Are they some sort of furniture? A row of massive postholes runs through the centre of the main room, perhaps to support the roof. After peeling off the topmost floor, we revealed an intriguing rectangular cut that severed two lower floors. I set my most experienced excavators to remove the fill and heard the Thai words Hua Kalok (‘skull’).

There, deep in the grave, was the contour of a cranium. As the day progressed, we uncovered the complete skeleton of an adult with bronze bangles, pots, an iron tool by the right shoulder, and an iron ring on the chest. Were the Iron Age occupants burying their dead under the floorboards? Beyond the outer walls of this building, we traced a narrow lane. There were no floors here, but refuse, shells, broken fragments of Iron Age pottery, and animal bones. Another building flanks this walkway, with multiple rooms and superimposed floors. Already we know there is an earlier building phase under the one we are uncovering – we can see the clay floors cut through by deep postholes. Perhaps there is, as at Ban Non Wat, Bronze Age and Neolithic awaiting us down deeper. Whatever we find, I will be reporting on it in CWA.