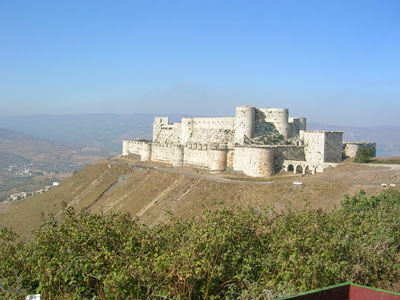 As the conflict in Syria escalates, Emma Cunliffe reports for CWA on the damage being done to the country’s heritage.

With the shelling of the al-Omari mosque in Dara’a in March 2011, Syria’s heritage became a battleground in the ongoing civil unrest. It is one of the earliest mosques, a testament to the formation and spread of both the religion and the Islamic state. More recently, it was the site of some of the first demonstrations and their subsequent suppression, acting as a rallying point, utilised as a fortress, and symbolising the protestors’ demands – resulting in a second bombing in May 2012. Where past and people meet, heritage cannot help but be drawn into the conflict, becoming a target itself.

For thousands of years, kings and empires have made their mark on Syria: from the mountains to the seas, the deserts to the grain fields, emperors and nomads alike made Syria their home. UNESCO has inscribed six World Heritage Sites here, with more under consideration. Now, the nation’s uniquely rich and impressive heritage is threatened. While the Directorate-General of Antiquities and Museums (DGAM) tries to protect the sites in their care, armed men, tanks, and blockades have made access challenging, if not impossible. However, modern phones and the internet are making information accessible as never before – and the picture being built up is worrying.

Assessing the damage
The extent of the damage can only be guessed at: for every famous site where damage is noted, others inevitably pass unreported. Nonetheless, shelling and gunfire are confirmed at four of the six World Heritage Sites. In February, Agence France-Presse reported from Palmyra – a popular tourist destination, famed for its beautiful oasis setting, which was added to the World Heritage list in 1980 and described as ‘one of the most important cultural centres of the ancient world’. It made grim reading: ‘Tanks were also deployed near the Roman ruins… those residents who have managed to get out spoke of daily machine-gun and tank fire’.

Further shelling occurred at the Ancient Villages of Northern Syria, inscribed only last year, and the city of Bosra, inscribed in 1980. We know, too, that Damascus and Aleppo, both amongst the oldest cities in the world, have been attacked and await reports on the scale of damage.

The Facebook group, Le Patrimoine Archéologique Syrièn en Danger, collates reports and online information of damage to sites. Examples include Ebla (Tell Mardikh) – a 5,000-year-old city under consideration for World Heritage status – which reportedly suffered major damage in a recent battle. YouTube footage of another site under consideration, Apamea, shows extensive shelling, with bulldozers going through the citadel walls. Originally older, the citadel is largely 12th century, surrounded by a 16th-century town. Both are still occupied, and the citadel in particular has been a centre of rebel protests. Apamea itself is a mostly Hellenistic city, notable for a long, beautiful colonnade that stretches across the site: another video shows a tank shelling it.

Looting spree
Equally worrying is the rise in looting. During and after the Gulf Wars, organised groups extensively looted sites and museums across Iraq, having access to resources and firearms that outmatched the officials who tried to stop them. Now, it seems, a similar situation is arising in Syria. The DGAM were able to place some objects into protective storage, but at least five museums have been looted – while unconfirmed reports mention two more. Items taken include antique weaponry, figurines, and a golden statue which, despite making it onto Interpol’s most wanted list in December, is still missing.

These finds are known, and documented. At Crac des Chevaliers, another World Heritage Site, armed gunmen broke down the door, evicted the staff, and began excavations to loot the castle.

There are reports of looting at Palmyra, possibly under the noses of the soldiers, and at Ebla. At Apamea, thieves drilled down to depths of 2m (6ft) to remove mosaics, as well as other finds. According to the Syrian Arab News Agency, ‘saboteurs attacked the guards and threatened to kill them if they tried to stop them from committing their crimes’. Despite almost 70 years of excavations, the damaged area at Apamea exceeds the total excavated area.

The removal of previously unexcavated items represents an incalculable loss: without knowing what was taken, objects are impossible to recover. Even assuming that they are somehow recovered, once stripped of their context, they provide little information about their creators.

Syria is a signatory of the 1954 Hague Convention for the Protection of Cultural Property in the Event of Armed Conflict, yet the list of damaged sites, buildings, and even entire historic neighbourhoods continues to grow. In a statement in March, the Director-General of UNESCO Irina Bokova expressed ‘grave concern about possible damage’ and called for site protection. Despite the ongoing efforts of the DGAM, the harm to Syria’s heritage is clearly huge, though the full extent may not be known for years, if at all. Some of the damage will be irreparable, some of the items taken irreplaceable, and some history will be lost or destroyed without ever having been known. The destruction has been committed (intentionally or otherwise) by those on all sides of the conflict, whether out of a desire for the protection of strong citadel walls, or in the hunting of those in opposition. Meanwhile, others watch opportunistically from the outside, creeping in to steal a heritage that does not belong to them, for a market seeking only to profit from others’ loss.

Syria’s history is a living museum, her monuments testifying to a remarkable people, both in the past and today. In her statement, Bokova called the damage to the country’s heritage ‘damage to the soul of its people and its identity’. They are at the heart of the conflict, but as the situation escalates, so does the imperative for a solution.