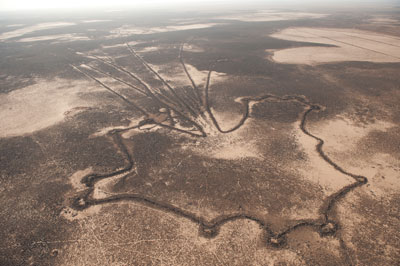 Thousands of previously unknown prehistoric stone structures have been found in some of the most remote and unexplored regions of the Middle East, thanks to the use of satellite technology. More and more, archaeologists working in remote locations are turning to virtual landscapes like Google Earth and Bing when neither aircraft reconnaissance nor archive aerial photographs are available. One such region is ‘Arabia’, the immense swathe of land sweeping from northern Syria to Yemen, encircled by the Fertile Crescent and the Arabian Sea. Largely arid and inhospitable, this land contains thousands of prehistoric stone structures – all revealed in images taken by satellites. As part of an extensive aerial archaeology project supported by the Packard Humanities Institute, David Kennedy has been using these high- resolution ‘windows’ to study sites in Saudi Arabia and Jordan. Known as the ‘Works of Old Men’ by the local Bedouin peoples, these structures seem to be the work of prehistoric, or certainly pre-Islamic, communities. The most distinctive category is a (probable) animal trap called a ‘kite’ because of its shape: a ‘head’ – the enclosure into which animals were enticed – and at least two trailing ‘tails’ or guide walls. These can be huge, with ‘heads’ up to 200m in diameter, and meandering ‘tails’ running for a kilometre or more.

A more enigmatic kind are the circular ‘wheel enclosures’ (also known as ‘rose’ or ‘jellyfish’ structures) common around Azraq Oasis. In their classic form they resemble old-fashioned cartwheels 50m-60m across, complete with hub, spokes, and rim. Outline shapes of ‘pendants’, ‘gates’, ‘cairns’, and ‘walls’ wandering for miles also abound in this region. Most have walls lower than 1m, making them largely invisible or at least unintelligible at ground level, but they can be clearly seen from above. As of September, some 2,609 new ‘kites’ alone have been identified between Mesopotamia and Yemen, and many more will doubtless be added in the future.

Sites like these have been known since the 1920s, reported by RAF pilots flying over rural towns and villages, forts and farmsteads in Jordan. Others were identified during the Comprehensive Archaeological Survey Project in Saudi Arabia in the 1970s and 1980s. This new technology, however, has revealed that the structures are far more numerous, and can be found across a much wider area, than was previously thought. After examining some 2.15 million km2, the Comprehensive Archaeological Survey Project revealed about 1,800 new sites. But interpreting a single satellite ‘window’ near Jeddah revealed 2,000 in an area of just 1,240km2. An unfair comparison, perhaps, but these startling results have important implications for the potential survival of archaeological sites in one of the least explored parts of the world. And, judging by the number of structures already recorded in just this small area, the total number of such sites must run into the hundreds of thousands.